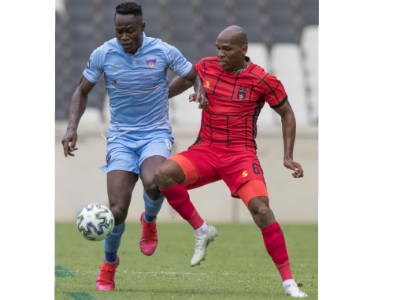 DStv Premiership newcomers TS Galaxy have a glorious opportunity to move up to top eight position for the first time under Owen Da Gama. Since Da Gama took over the reigns from Dan Malisela in early January he has been in the dugout in four matches for Galaxy.

He has won two, drew and lost the other one and ironically that defeat came in the hands of Masilela at Chippa United. That was Da Gama and Malisela’s first match at their new clubs.

After that loss Galaxy played three matches and they collected seven points that took them out of the relegation zone to 11th place and three points away from top eight. Saturday they face the very same Chippa they last tasted a defeat at.

The clash will be a Nelson Mandela Bay Stadium at 3.30pm. Galaxy midfielder Mlungisi Mbunjana relishes the opportunity of facing Chippa again.

“It’s good that we are still unbeaten this year. We’ve been fortunate that we have managed to get maximum points away from home,” said Mbunjana.

“The only match we didn’t win was a draw against Orlando Pirates which was a good result. We are looking forward to facing Chippa. We have prepared for them the very same way we did when we beat Maritzburg United and Black Leopards away.”

Chilli Boys on the other hand have impressed under Malisela. They have played five matches of which two were won, a draw and two defeats.

Their last match they drew 1-1 away at Bloemfontein Celtic last Saturday. Chippa striker Eva Nga Bienvenu who scored his first goal this season and an equaliser against Celtic said they know Galaxy very well.

“We know Galaxy, they are coming to us wanting three points. But we have prepared for them well. It would be good for us to get three points. We want those points that are important for us,” said Eva Nga.

“I was very happy with the final score and the important thing was that it was an equaliser and we got a point away. Besides that, it also gave me the confidence I needed.”