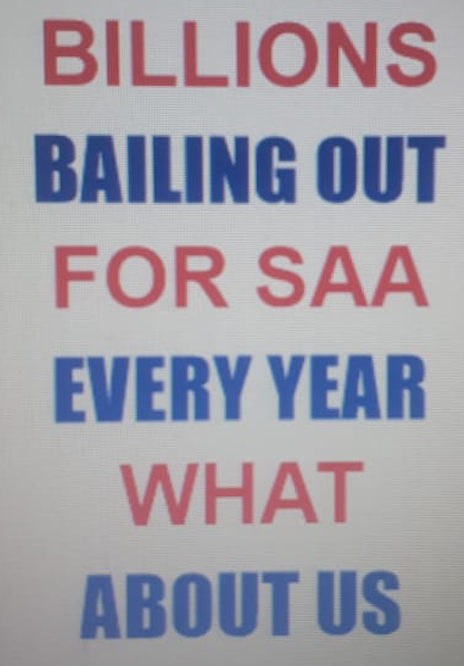 Hundreds of thousands of Johannesburg commuters will be stranded on Monday if taxi operators make good on their threat to down tools.

And taxi owners are threatening to shut down the whole country if government doesn’t meet their demands for Covid-19 relief.

In areas like Alexandra, there are no other means of public transport.

There is still some hope the operators can find common ground with government that will prevent the shutdown. Taxi bosses are preparing a campaign, making posters like the one above.

Last week the government announced a R1,135 billion package to help the taxi drivers with Covid-19 relief. This adds up to about R5,000 per taxi.

But Emmanuel Maleka , national spokesperson of Top Six Taxi Industry, described this as an insult.

“Our demands are simple,” Maleka said. “We need funds from the government that we lost during the lockdown.”

Maleka said they were demanding a bailout of R10,5 billion – ten times more than the government was offering.

Armsta chairman Molefe Moekeletsi told Scrolla.Africa they are asking government for R20,000 for each taxi for each month they have not been working. This adds up to R60,000 for the three months of lockdown.

“We can negotiate with the government and come down to R45,000 as a minimum,” said Moekeletsi. “But we will not accept the R5,000 offered by the ministry because that is just too little.”

Transport Minister Fikile Mbalula met with Santaco representatives on Friday. He said he was aware of the unhappiness within the taxi industry, but warned against the planned shutdown.

But Maleka said the Gauteng shutdown was just a starter. “We will go for two weeks without operating and let us see how the government will operate this country.

“We started in Gauteng, and soon we will go national. We will shut down the country.”