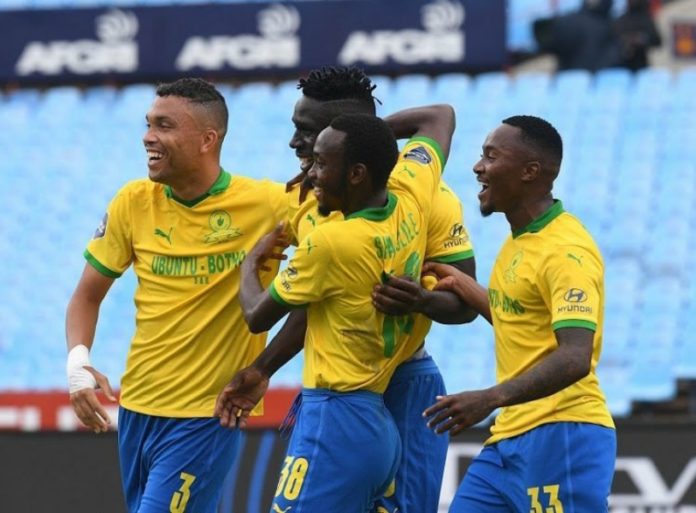 Defending Nedbank Cup champions Mamelodi Sundowns progressed to the last 32 of the tournament with a hard-fought 3-2 win over Stellenbosch United.

Man of the match winner – Namibian international Peter Shalulile –  scored the winning goal three minutes before full time of extra time to take the Sundowns bench into a frenzy of jubilation.

The Stellies started the five-goal thriller – at Loftus Versfeld Stadium in Pretoria on Wednesday evening –  like a house on fire with counter-attacking football.

That was evident when Ashely du Preez calmly slotted home to put the visitors ahead in the 12th minute, following Rivaldo Coetzee’s error. But four minutes later, Shalulile scored the equaliser for Sundowns to open his Nedbank account.

Steve Barker’s men resorted to reinforced defending and counter-attacking with the pace of Du Preez.

However, that strategy did not seem to work for Stellies, especially after the introduction of Lesedi Kapinga – who proved to be a menace for Stellies’ defense with his short combinational passes.

Ricardo Goss, who came in for the injured Denis Onyango, was a spectator for stretches of the match. His counterpart, Sage Stephens, kept Stellies in the game with several saves.

After the interval Sundowns had to dig deep to get the winner. It eventually came in the dying minutes of regulation time through Gaston Sirino who drove a low-range pass from outside the box in the 90th minute. It sealed a lovely interchange pass with Kapinga.

However, just when all eyes were on referee Luxulo Badi to blow for the final whistle, two Stellies substitutes combined, as Phathutshedzo Nange easily tapped in Junior Mendieta’s cross with the last kick of the game. This took the match into extra time.

There was no much action in the first-half of extra time as Stellies absorbed Sundowns’ pressure.

The duo played a quick-interchange pass and then the Namibian international found the back of the net with a well-taken goal that beat Stellies goalie Stephens.

Sundowns will be looking to go all the way to win the trophy for the sixth time under the name Nedbank Cup.