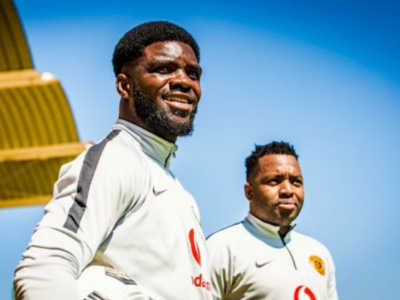 With spirited SuperSport United coming to Soweto, Kaizer Chiefs coach Gavin Hunt have every right to be concerned – especially about his leaky goalkeeper’s department. On Saturday Amakhosi host second place United in the DStv Premiership at FNB Stadium at 3pm.

United are coming with their current league leading goal-scorer Bradley Grobler who is hungry to add to his 12 goals. Hunt face new challenges as experienced former Bafana Bafana number one Itumeleng Khune makes mistake after mistake.

This is probably the worst season Khune has had since taking over the goalkeeper’s jersey after the departure of Rowan Fernandez over a decade ago.

Khune missed two months of action after Hunt decided to drop him for costly blunders in December.

“I thought it was the right time to bring Khune back. The goalkeeping department has certainly been a problem,” said Hunt.

Khune missed 10 matches in all competitions before making his comeback on Wednesday against AmaZulu in the Premiership match – and took up exactly where he left off before he was dropped.

He made yet another blunder which gifted Usuthu the maximum points.

Before Wednesday’s match Nigerian international Daniel Akpeyi was the man between the sticks and even he found the going tough.

“It’s not the place nor the forum to talk but it’s a big concern since I’ve been here,” said Hunt on SuperSport TV.

The four-time league winning coach said: “It’s something we just have to keep working on and hopefully we can improve, I think it’s a bit more than that but it’s something that’s a concern. A big concern.”

Wednesday was Hunt’s 880th game as a coach of a topflight team in South Africa.

So far in the Premiership Chiefs have conceded 19 goals in 16 matches and they have scored 17.