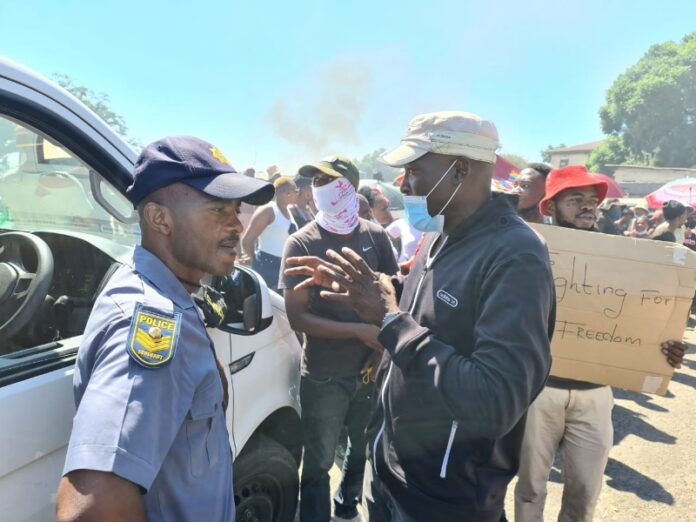 Simon “Msayza” Rati, the leader of the violent anti-immigrant group Alexandra Dudula Movement, has been arrested following months of being hunted by the police.

Provincial Police spokesperson Lieutenant-Colonel Mavela Masondo confirmed the arrest of a 47-year-old man after being on the run for several months.

He will spend the weekend in police cells and appear in the Alexandra Magistrates Court on Monday.

Since his movement was launched, police faced constant calls to arrest the leaders of Dudula Movement, which brought terror and uncertainty to local investors and businesspeople in the country’s oldest and poorest township.

Its message is simple and unlawful: evict every foreign national, whether they are in the country legally or not.

The movement has been courting controversy from the beginning.

It began operations on the back foot when it made a launch poster in February that featured the official police logo, implying that the police were part of its planned operations.

The Johannesburg Metro Police Department (JMPD) came out guns blazing, and went to lengths to distance themselves from the movement.

But despite its embarrassing beginnings, its operations went ahead and its following grew.

Every day, more and more people joined the Dudula Movement around the Pan Africa Mall to threaten foreign-owned businesses. They went from stall to stall, asking every single merchant to show their documents to prove they were there legally. This in itself is a crime; civilians cannot make other civilians show them their IDs.

Over the following months, many stalls belonging to suspected foreigners were dismantled and often burnt. Some people were even shot and wounded by the movement’s more violent members.

Their operation was widely covered by the media and it eventually captured the attention of the Department of Home Affairs.

In March, officials moved into the township and conducted what they called Operation Restore where they arrested several illegal immigrants in the township.

Foreigners, for whom life became a misery, fought back and the two groups clashed violently on 07 March.

The following day, the movement forced shops to close, regardless of whether they were owned by foreigners or South Africans.

Scrolla.Africa profiled Msayza who revealed that he has been in jail many times. The last time being last December.

While the Dudula Movement has only been in the national spotlight for the past five months, its members have been operating in the township for many years.

They have evicted many people from their RDP houses, claiming that the government subsidised houses were not supposed to be lived in by foreigners.

They would reportedly then collect rent from the South Africans they moved into the houses afterwards.

The movement’s members have tallied up more than 200 criminal cases registered at Alexandra Police Station, ranging from the pointing of firearms to assault and illegal evictions.

Although for the past few weeks the Dudula Movement has not been involved in any violent incidents in the overpopulated township, foreign nationals continue to live in fear of them.