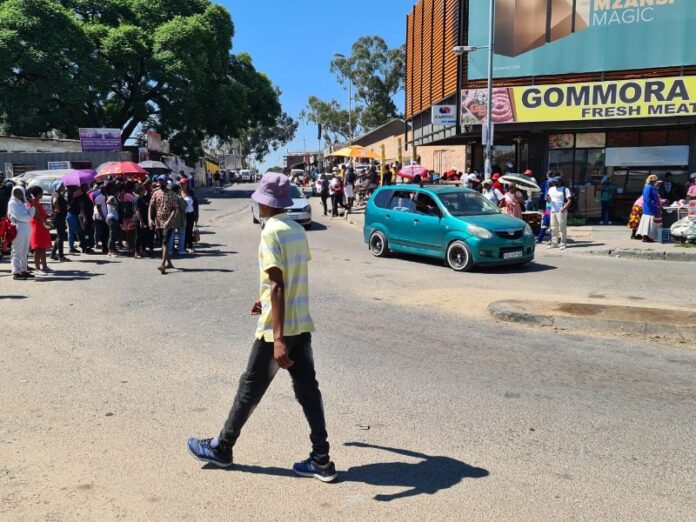 Four members of the anti-immigrant group were arrested in the afternoon at Pan Africa Mall for common robbery, sources at Alexandra Police Station told Scrolla.Africa.

A further five suspects were arrested later on Wednesday evening after they tried to forcefully evict a family from their home.

Rati said that members of the group plan to meet at Alexandra Police Station on Thursday morning to demand their release.

According to Rati, police who arrested the four members of Dudula outside Pan Africa Mall were assisted by a group of foreign nationals in the area.

At 7pm on Wednesday evening, chaos ensued after a bakkie carrying Dudula members pulled up at the house of a South African family in Extension 9 who the group had allegedly been trying for two weeks to evict.

Hilda Mthombeni, a resident in the home, confirmed to Scrolla.Africa that five Dudula Movement members were arrested.

“The Dudula members came with a bakkie full of furniture ready to move into our house,” Mthombeni told Scrolla.Africa.

“They started throwing out our belongings from the house so that they can put theirs. They brought their beds, chairs, tables, bathroom mirrors, and all that a house needs.”

She said her family has been tormented and harassed by members of the Dudula Movement for almost two weeks.

Four members of the movement were arrested last week for trying to evict the family from their home. Children who live in the house were seen trying to escape the members from the rooftop.

After this incident, police had given Mthombeni a number to call next time they showed up.

“I called the police and swiftly the men and women in blue arrived and arrested five,” she said.

“On Tuesday the Dudula Movement members came looking for me. But I was at work and they didn’t find me.

Themba Mashele, one of the residents of the house, said the family is tired of being harassed. He said that an armed group arrived at his home last Thursday.

“One of the members had a firearm with 24 live ammunition and two empty cartilages,” he claimed.

He said he has no idea why the members accuse him and his family of being foreign nationals.

“I am a South African. I was born and raised in Daniel Rabalela village in Giyani, Limpopo province.”