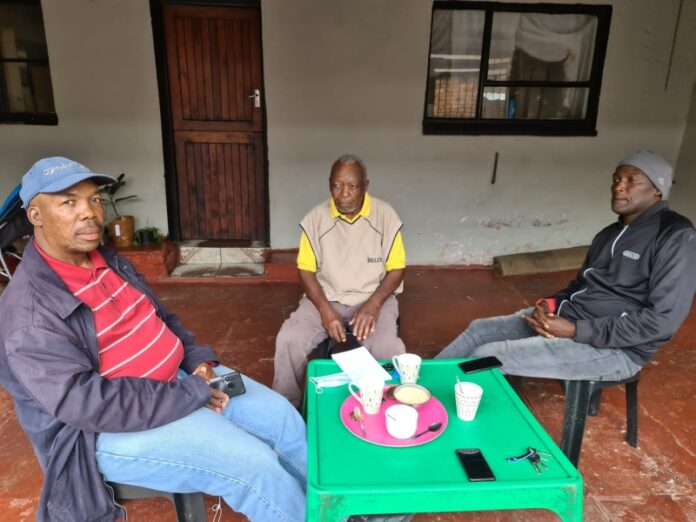 The leader of the anti-immigrant Alexandra Dudula movement, Simon “Msayza” Rati, is a parolee who has recently been released from prison. Now, he says, he is giving back to the community.

Since Monday, Rati has led demonstrations outside Alexandra’s Pan Africa Mall in which foreign-owned businesses and stalls have been forcibly shut and, in some instances, set the stalls on fire.

Multiple foreign vendors have been evicted by Dudula movement demonstrators.

In an exclusive interview with Scrolla.Africa, Rati described his actions as “giving back to the community” as it is one of his parole conditions to be a “good example” in society.

The banging of jail cells and the locking key sounds are not new experiences to Simon.

Talking from his home in Alexandra, Rati revealed that he has been arrested several times and has been convicted three times for different crimes.

“My first arrest was when I was 19 years old in 1997. I was sentenced to four years in prison for motor vehicle theft,” he said.

“While in jail, I met hardcore and professional criminals whom I exchanged numbers with. After my release, I upped my game and continued with my criminal acts.”

Rati was arrested again in 2001 for armed robbery. The case dragged on until 2003, when was sentenced to 20 years in prison.

Simon did not learn from his two previous convictions. Not long after he was released, he was arrested again in 2014 for being in possession of stolen goods. He spent the next six years inside and was released in December 2020.

He said the Alexandra Dudula movement has been in effect since 1995.

“Our big mandate as a movement has been to reclaim the township economy for South Africans, fight crime and drug abuse in the society, and lead from the front.”

He claims that since 1995, the movement has illegally evicted and reclaimed more than 100 RDP houses owned by foreigners – both documented and undocumented – in Alexandra.

Over the years, the Dudula movement has been accused of other crimes.

“I know that there are more than 300 cases registered at the Alexandra and Bramley police stations of rape, attempted murder, pointing of firearms, assault, and others,” he explained.

“The cases that the Dudula movement can account for are illegal evictions. Those are cases against us and not rape or attempted murder,” he said.

Msayza, who was raised by a single mother, said he got involved in crime because of teenage peer pressure.

“I am glad I am no longer doing crime. I am leading by example for leading the Dudula movement in reclaiming Alexandra township.