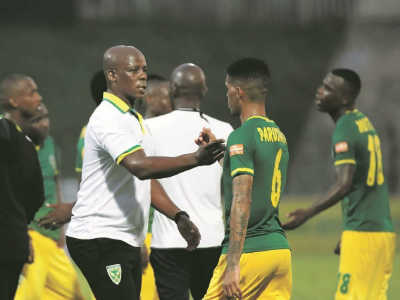 Coach Mandla Ncikazi will be looking for nothing less than maximum points from his Golden Arrows team to go with the good news that was delivered to them on Monday.

In their last seven matches Arrows collected 16 points with five victories, one draw and only one defeat.

They walked away with R1,5 million, which will certainly motivate the Durban-based team to continue to do well this season.

On Tuesday they will host bottom of the table Black Leopards at Sugar Ray Xulu Stadium in Clermont at 5pm.

Arrows will be relying on their top scorer Velemseni Ndwandwe for goals – the lanky striker having netted five goals after 15 matches.

A win for Abafana Bes’thende will see them tied in second place with SuperSport United.

Their long break will come in handy as matches are coming thick and fast.

In their last match just over a week ago they were 3-1 victors over Stellenbosch.

The Serbian, who has coached several South African teams was announced last Thursday as the new Leopards mentor.

Fresh from a derby defeat, Papic will face a mammoth task to try and rescue Leopards from relegation.