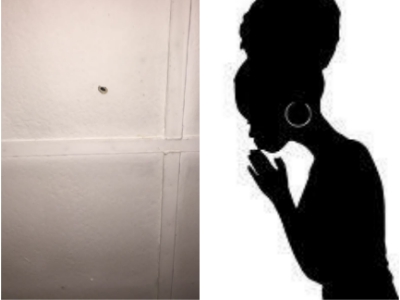 Grace Baloyi believes that God saved her from certain death when a stray bullet slammed into the exact spot she was sitting moments after she went off to pray.

Grace, 45, from Alexandra, said that until a few minutes to 9, she was sitting on the couch watching her favourite soapie, The Queen. “As the time neared 9 o’clock, I left the couch because I go for prayers at that hour every night.

Live ammunition came down through the ceiling and hit the couch where Grace had been sitting.

“Soon after my short prayer in my bedroom, I felt tired. I felt too lazy to go back to the lounge to continue watching TV. As I was trying to decide whether I should go back or not, I heard a strange exploding noise from the lounge.

“It sounded like a light bulb had exploded,” she said.

Grace said she heard her 17-year-old daughter who was still in the lounge screaming and telling her that there is a bullet in the lounge that came through the ceiling.

“My daughter is the one who told me that the bullet landed straight where I was sitting.

“When I came to the lounge, I couldn’t believe my eyes. If I had not moved, I could be lying in a mortuary now. I believe that God saved me. I serve God and my ancestors who have an upper eye watching over me,” she said.

Grace said that to this day, she still has no idea where the bullet came from.

“One thing that I can tell you is that there are a lot of guns in Alexandra.

“Maybe people were fighting somewhere, then somebody shot in the air and the bullet came back through my house. Anything is possible. It is so scary,” she said.

She said that she and her daughter struggled to sleep that night. They were worried another  stray bullet might find its way into their bedrooms.

“My daughter is still traumatised, especially when she hears an unexpected banging sound in the house. Whoever did that steal our peace in the house,” said Grace.

Grace said shooting a gun in any direction, even one you believe to be safe, can have tragic consequences. “Many people’s lives have changed for the worse because of stray bullets.”