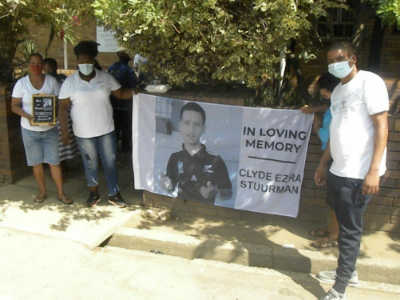 The shooting to death of Clyde Stuurman of Jeffreys Bay, Eastern Cape has dampened the celebratory mood among the direct descendants of Chief Dawid Stuurman.

The shooting came as Port Elizabeth Airport was in the process of being renamed after Stuurman, the great grandfather of the deceased Clyde.

Dawid Stuurman was a Khoi chief who fought against Dutch and British colonial rule between 1799 and 1819.

The alleged killer, Donovan Wolf, also of Wavecrest in Jeffreys Bay, appeared in the Humansdorp Magistrate’s Court on Wednesday and applied for bail.

He claimed he acted in self-defence.

According to an affidavit submitted to court, Stuurman, 26, told his older sister, Lucretia, of an alleged threat he received from an identified man on 18 January.

Wolf, through his attorney, Alwyn Griebenow, told magistrate Una Rhodes that on the night of the fatal shooting, his wife, Jodi panicked at seeing suspicious activity around their home.

The affidavit says Wolf grabbed his gun and was setting out to investigate. He looked over the wall and saw someone walking in the open plot.

Wolf is said to have approached the area while holding his firearm.

He claimed that Wolf came face to face with a knife wielding Stuurman.

The deceased’s cousin, Nicklaas Draai refuted Wolf’s statement saying that he had promised to kill him before.

“Clyde was a man loved by the entire community of Wavecrest. This is why the social platforms are jammed with angry people who are not happy.

“Clyde would not even injure a fly. Clyde’s mother passed on in December and we were still mourning her. We want justice to be done.”