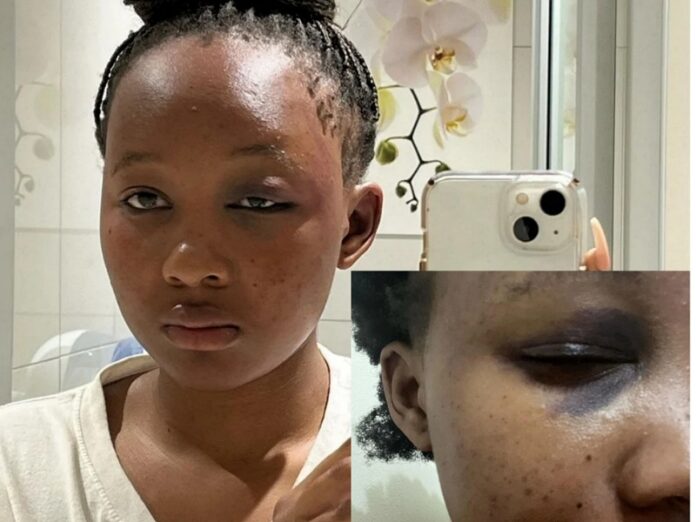 Actress Sonia Mbele will not turn a blind eye to abuse — even if the perpetrator is her own son.

On Wednesday, Sonia’s son’s girlfriend Reokeditswe Makete shared on her Instagram page that she is being physically and emotionally abused by her longtime boyfriend and father of her child.

She shared pictures of her bruised and battered face.

She alleged that Donell Sedibe was physically and emotionally abusive, beating her badly and taking over her social media accounts.

“He abused me on four different occasions, each time worse than the last,” she said.

“In the recent attack, I wanted to lay charges but was conflicted by my love for him. I put him before myself and all I thought about was his future and how selfish I would be to ruin it.”

Makete added that Sedibe locked her out of her social media platforms, preventing her from posting about her ordeal.

“He deleted them because he doesn’t want the public to know what kind of a bad man he is towards her,” she said.

After the allegations surfaced, Mbele addressed them in a statement released later on Wednesday.

Mbele shared her past experience of abuse at the hands of Sedibe’s father, Leslie Sedibe to whom she was married for eight years before divorcing in 2014.

“I was trapped in an abusive relationship for nine years. I was abused physically, psychologically and emotionally,” she said.

“As a victim of abuse, I don’t stand for, support or condone such a stance.”

She previously shared in the media that during her marriage she even once contemplated suicide.

“I had to put my career on hold to try and make my marriage work,” she said.

The actress added that after the divorce, she should have taken preventative measures earlier such as counselling or child therapy for her children.

“Sometimes the mistake we tend to make as African single mothers is to assume and hope that things will work out for the best, meanwhile certain past behaviours can affect generations to come,” she said.