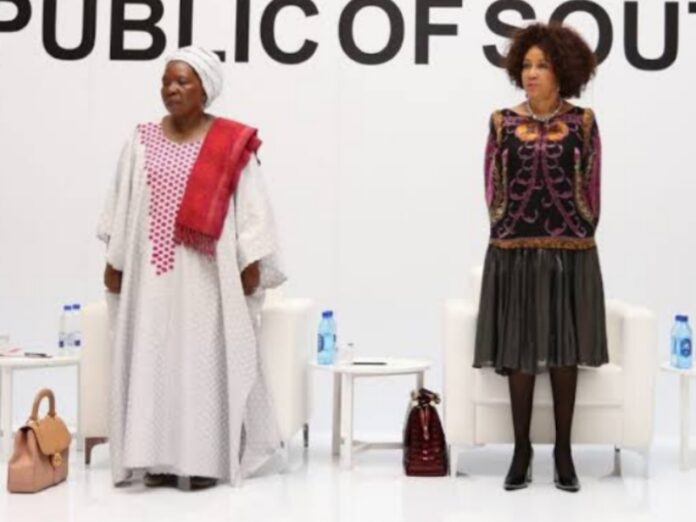 Tourism minister Lindiwe Sisulu is now under much pressure to confirm her loyalty to the pro-Jacob Zuma faction in the ANC.

The Radical Economic Transformation (RET) faction which blames Sisulu for Nkosazana Dlamini-Zuma defeat at 2017 ANC elective conference in Nasrec, now sees her as an important ally in their quest to remove President Cyril Ramaphosa.

RET forces believe that she gave Ramaphosa a clear path to the presidency by taking votes from Dlamini-Zuma.

Sisulu threw her hat into the ring for the presidential race ahead of the 54th ANC elective conference that was held at Nasrec.

Now some RET members in KwaZulu-Natal say that it was Sisulu’s presidential ambitions which led to Dlamini-Zuma’s failure.

They say that Sisulu split the women’s vote, giving Ramaphosa a straight run for the presidency.

The discussion was held in a very powerful Friends of Jacob Zuma WhatsApp group, with the conversation leaked to Scrolla.Africa.

One participant said it was high time for Sisulu to come out clear because she never said she was part of them but it’s the RET faction that is pushing her name.

Others have questioned if she will be able to bring back the land and amend section 25 of the Constitution to effect expropriation of land without compensation.

“Maqabane it seems like as RET, we are the ones pushing for Sisulu but she has never come up in the open to declare her association with us. This is serious comrades because she betrayed us at Nasrec and NDZ was defeated because of her,” said one participant.

Nkosentsha Shezi who is the champion of the RET and part of that WhatsApp group told Scrolla.Africa that it is true that Sisulu led to their candidate, Dlamini-Zuma’s defeat at Nasrec but “she has shown herself that she is the leader they need in the ANC”.

“We do know what Sisulu did in 2017 against Dlamini-Zuma but she has shown us that she is part of the RET with the likes of comrade Ace Magashule and others. She has also taken a very brave stance against Ramaphosa who is killing the ANC. Besides all this, you need to understand that the branches of the ANC have not decided on who will be the president and not all or everyone will be elected to be the president of the party,” said Shezi.