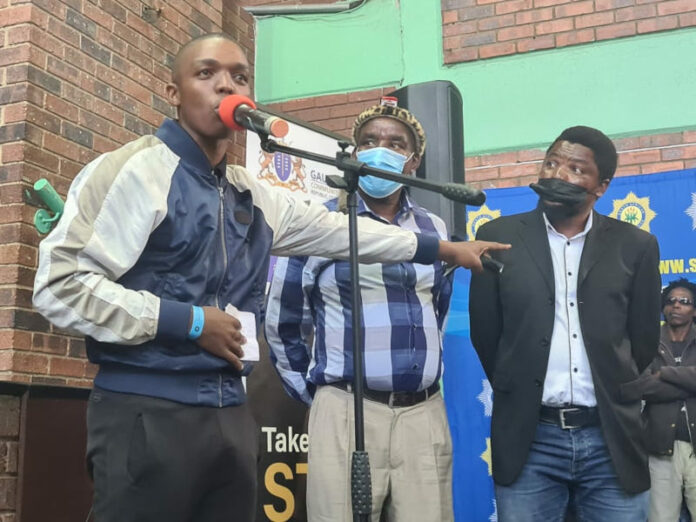 Following a spree of criminal activities in Pimville, Soweto, Police Minister Bheki Cele returned to the troubled township to engage with residents in a Street Imbizo.

Residents have grown frustrated with the crime rates in the area, taking to the streets demanding that something be done to reduce the high rate of crime in their area.

The Imbizo comes off the back of the initial visit to the area by the police minister on Wednesday 20 April 2022, following a cable theft related shooting incident that claimed the life of Pimville resident Kgomotso Diale and injured five others last week.

Two people have since been arrested and charged with murder and attempted murder.

Agnes Sibasa who was present on the day of the shooting over a week ago says she survived but was injured when she stepped on a live cable.

“I got burnt but luckily managed to pull myself out but with serious injuries,” she added.

Tshegofatso Mashego said there are criminals who own heavy guns within the township.

“We are afraid of thugs who terrorise us day and night. At night, we hear gunshots as if we are in a war zone,” she said.

While MEC for community safety Faith Mazibuko called residents to come forward to voice their frustrations to authorities, a group of EMS paramedics took to the podium to voice their own issues with the community.

Representative of the group Kamogelo Mulaudzi raised concerns about how hard it was to work in a community where they are also targeted.

“We work in fear in this community. We have seen our colleagues being robbed and some female counterparts raped,” she said.

When Operation Dudula leader Nhlanhla Lux Dlamini was given a chance to speak, he told Cele to take action and get rid of squatter camps or Dudula would do it themselves.

But Cele didn’t nurse anyone’s feelings, he told the crowd that the police will not allow anyone to act outside of the law.

Minister Cele added that the police will deal with criminals whether foreigners or locals.