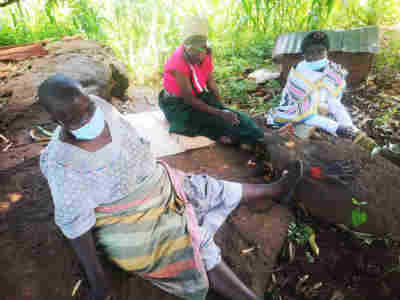 With her old-age pension grant of R1,860, gogo Mashudu Matamela supports herself, three grandchildren and her unemployed son.

No matter how careful she is with managing her money, she barely makes it through the month.

So when she went to draw her pension last week and found that an unscrupulous thief had drawn all her money from her Sassa account, her family immediately fell on hard times.

She is one of five pensioners we know of in the remote village of Halukhwa Mukula – outside Thohoyandou in Limpopo – who fell victim to a conwoman claiming to be from Sassa and working on instructions from the office of President Cyril Ramaphosa.

The 78-year-old gogo Matamela said she was still in shock and confused as to what to do, as she has no food and the electricity is about to be finished.

Her pension money covers her groceries, electricity and also school pocket money for her grandchildren.

“A young looking woman with a mask and hat on approached me and told me she was sent by president Ramaphosa to give us food parcels. But we should have our identity and grant cards.

“I was reluctant at first but finally handed over the documents to her.

“She told me to get a copy of my identity and as soon as I entered the house she changed my card and put another one in an envelope.

“I only realised I was conned the next day when I opened the envelope to find that the card belongs to a local old man.”

It turns out gogo Matamela was not the only victim at the local clinic where they were supposed to collect their food parcels.

“The woman cleaned all my grant money and I am still struggling to come to terms with what happened.

“I have nothing at all and would accept any help for life to go on.”

Gogo Tshavhungwe Netshivhumbe told Scrolla.Africa that the con artist took her ID and Sassa card, then told her to collect her food parcels at a local clinic.

“I only realised that I was conned when I tried to withdraw money in town to find only R20 left in my account. I am very devastated.”

Sassa Limpopo spokesperson Zwanda Kutama said they did not know the woman in question and they were working with police to locate the suspect.

Limpopo police spokesperson Brigadier Mojalefa Mojapelo urged anybody with information about the crime to contact Sgt Mulalo Singo at 071-493-4077 or contact the Crimestop on 0860010111.