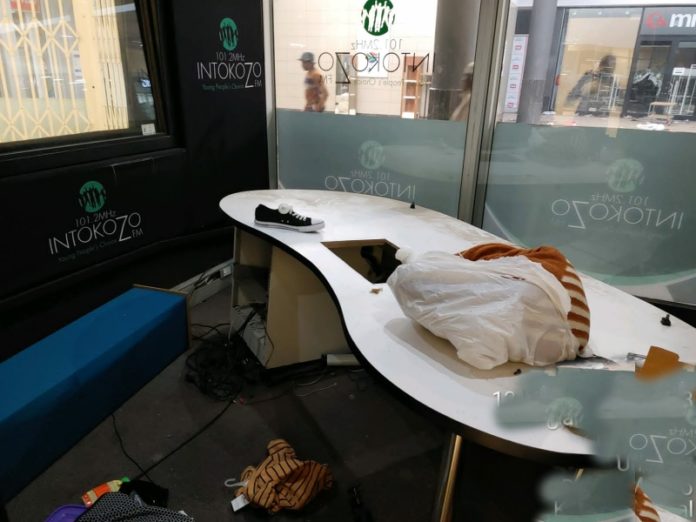 Five community radio stations in Gauteng were looted and broadcasting equipment worth millions was stolen on Tuesday.

In KZN, uMlazi’s sole community radio station, Intokozo FM in Durban, is temporarily off-air after their studio equipment was looted from uMlazi Mega City Shopping Mall where the studio is situated.

This comes soon after the Independent Communications Authority of SA (Icasa) reported on Wednesday that 113 network towers have been vandalised since Monday.

The attacks have resulted in the disruption of communication services.

Intokozo FM Station’s manager Mxolisi Ntanzi told Scrolla.Africa that they only knew about the theft and vandalism on Monday morning.

He said they don’t know how much the stolen equipment is worth but the station will only play music until they make another announcement after meeting with different stakeholders during the week.

“We are busy trying to get the situation back to normal,” said Mxolisi.

The station, which was founded by the youth of uMlazi, employs many young journalists and aspiring presenters, who are given a chance to kick-start their careers after tertiary education. They also employ those who are doing their in-service training but they have been stranded without a job.

“We are left with only tables and broken chairs,” said Mxolisi.

Newsreader and presenter Millicent Cele said she was disappointed that the community did this to them.

“As a young journalist, I gained so much experience working for the radio station. I was hoping to work here for a few more years. I’m not sure how we will survive this,” she said.

On Tuesday, Scrolla.Africa reported on two radio stations in Gauteng, Mams Radio in Mamelodi and Alex FM in Alexandra, that were trashed.

The SA National Editors Forum has condemned the attacks against journalists and the vandalism of the radio stations affected, including the Westside FM in Kagiso, Soweto.

Meanwhile Icasa chairperson Dr Keabetswe Modimoeng announced on Tuesday that they have written to the National Joint Operations and Intelligent Services, asking them to protect the critical telecommunication infrastructure.