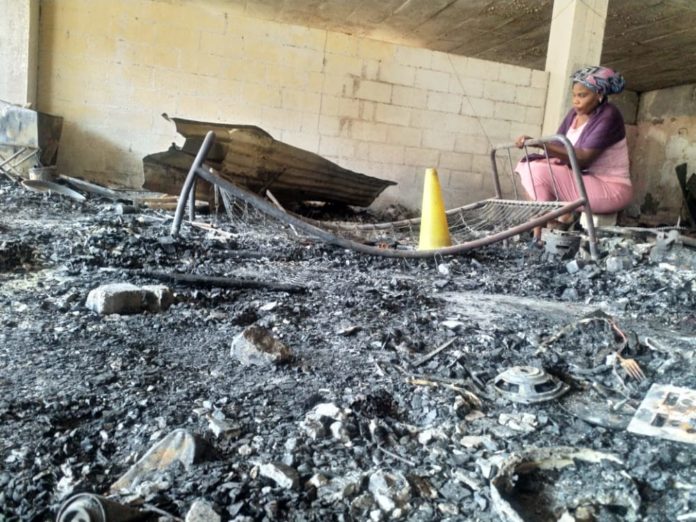 Horrified residents stood by helplessly as a man screamed in agony, pleading for help, behind the closed door of a burning shack.

Next to the shack, the cries and screams of a two-year-old toddler was heard through the thick cloud of smoke.

But no one could brave the fires and the two perished in a fire that left many people homeless in Alexandra on Saturday night.

Sindiswa Xhabadiya (38), the partner of the dead man, said she was having a drink with her boyfriend Lungelo Khumalo at a tavern when he asked her to take him home.

“He said he was hungry,” she said.

“I came home with him and we had a meal together. I left him laying on his bed and I went back,” said Sindiswa.

But then she heard the place was on fire.

“I rushed back but the fires were already too much and I couldn’t get close.

“I stood watching as the shack burnt down. Later, after the fire had been put out, we found Lungelo’s body in the ashes,” said Sindiswa.

“My boyfriend was everything to me. I’ll miss him so much.”

She said Thandokuhle’s mother left the room to go to the outside toilet.

“My granddaughter’s death has torn me apart,” said the gogo.

“Before she could get back to the shack, she heard people screaming about a fire. There was already a thick cloud of smoke and a huge fire. None of us had a choice. We stood by helplessly,” said gogo Ntombinkosi.

About 144 residents were left homeless and 16 were cars burnt beyond repair.

Gogo Ntombinkosi accused the Johannesburg Emergency Management Services of letting the community down.

“The fire station is just across the road and we went there many times asking them to put out the fire but officials told us that they didn’t have water trucks. After waiting for an hour, the truck arrived, but it had no water!” she said.

“The firefighters also stood there watching the fires wrecking the shacks.”

Johannesburg EMS spokesman Robert Mulaudzi confirmed that officials were called to help put out the fire on Saturday. He said the cause of the fire is not yet known.