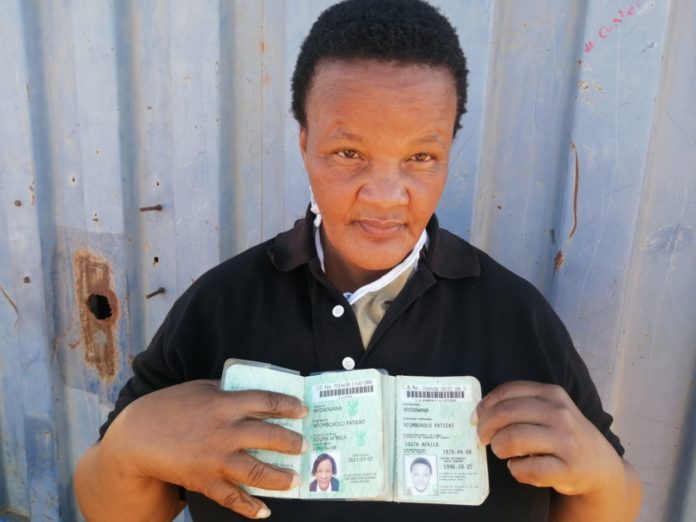 She slept with a Home Affairs official.

She slaughtered a goat.

But she still has the wrong ID.

Because of all the things she has had to do to get the correct identity document.

After a decades-long nightmare of dealing with Home Affairs she still doesn’t have the correct ID.

Ntomboxolo says the Department of Home Affairs has destroyed her entire life. She’s drowning in debts from the mashonisas (loan sharks). And she can’t work without her ID.

In 1991 she applied for an ID while doing matric. “After applying twice, I received my ID. But then officials told me that my ID number was incorrect and they scratched it off.”

In 1993 she was already at Nelson Mandela University doing her BA in Education. “Home Affairs told me that my finger prints on the documents had changed. In October I had to quit university.”

In 1993 while she was in the queue she met an official who promised to “help me if I had sex with him. We went to the toilet and had sex. After sleeping with him, he gave me toilet paper to wipe myself. But he never helped with my problem.”

In 1994 she went back to Home Affairs. “I wanted a temporary ID to vote. The same official asked for sex again but I refused. Instead I asked other officials to help me.”

In 1995 she was told by one of the officials that her problem was she had too much bad luck.

“He advised me to slaughter a goat and appease my ancestors. I consulted three sangomas and prophets who gave me muti to apply on my skin and put under my tongue when I visited Home Affairs. But the muti never helped.”

In 1996 she went back again and “another female official asked me to buy a drink for her. The official said the drink was for them to help me to fill in the forms. I wrote a letter reporting those officials to their head office.”

In 1997 she finally received an ID. “But my second name, which is Patience, was written as Patient.”

In 2005 she went back to university to continue her studies. “But the bank card which I used to withdraw the grants for my children was blocked. I was told at the bank that I was sharing the same ID number and names with someone from Grahamstown.”

In 2011 she went to Home Affairs to confront the official she had slept with. “I asked him what favour he had done for me if I was still struggling with my ID. What was the point of sleeping with him.

“Police had to be called to intervene as the official also threatened to beat me up. But a few months after this incident I received my ID. Life was good.”

Nine years later the ID problem came back to haunt her again.

In July 2020 she lost her Sassa card to withdraw her child support grant for her three children.

“I was told my finger prints and my ID number do not exist.

“I am as good as dead because I don’t have an ID. My entire life I have been fighting to get the right ID.”