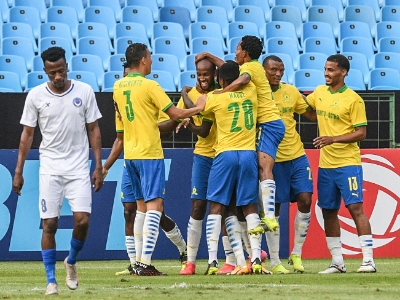 Mamelodi Sundowns got their Total CAF Champions League group stage campaign off to a perfect start, with a 2-0 home victory over Al Hilal at Loftus Versfeld stadium in Pretoria on Saturday.

Goals in each half by defender Mosa Lebusa and striker Kermit Erusmas were enough to give Masandawana a two-goal cushion and a place at the top of the group following a shocking draw between TP Mazembe (Zambia) and CR Belouizdad (Algeria) in the other match.

Mose Lebusa Tweeted: “We analysed their corners and we capitalised on that, especially in the near post and that’s how I scored the goal.”

“I knew once I connected with the ball that it’s going in, just a little bit of a touch. We have been working on it and I am glad it worked out.”

The 2016 CAF Champions have played the Sudanese side Al Hilal three times in this competition, with two wins and a 4-2 defeat back in 2008.

The clash saw newly-signed defender Rushine De Reuck make the bench for the first time since joining the Brazilians from Maritzburg United.

Meanwhile, in the CAF Confederation Cup Orlando Pirates cruised to 3-0 win away against Botswana Champions Jwaneng Galaxy to edge closer to group stage qualification on Sunday afternoon at Gaborone National Stadium in Botswana.

The return leg will be played in Johannesburg next Sunday and Pirates have one foot in the group stage having last played in the CAF Confederation Cup group stage back in 2015.