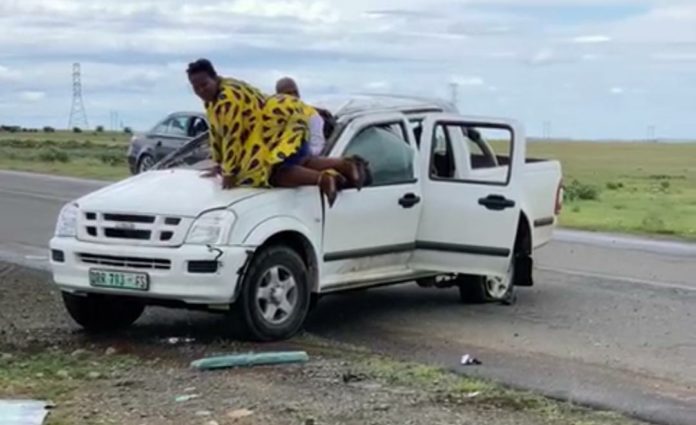 Little did the grade 11 learner know when he attended his friend’s funeral that he would be next.

The learner died on the way from the burial on Saturday in Botshabelo, Free State.

The bakkie he was traveling in allegedly burst a tyre, lost control and threw out all the passengers.

Videos showing the aftermath of the crash went viral on WhatsApp and showed some of the people lying on the ground without moving.

One resident Mamaki Lesemelo told Scrolla.Africa: “The Isuzu had about over ten passengers returning from a burial of one of the school kids. Just after the funeral, everyone was heading to the home of the deceased kid to get food.

“I was shocked when I saw the bakkie lose control and everyone being thrown out. It was a sad incident that I regard as bad luck. I was later saddened to hear one had died in hospital after the crash. Now there will be another funeral and this is a death at the funeral scenario.”

He told Scrolla.Africa: “Initially a case of reckless and negligent driving was opened at Boithuso Police Station. This is after a white Isuzu double cab bakkie had a burst tyre and the 41-year-old African male driver lost control of the vehicle.

“Fifteen people who were traveling from the cemetery were injured. One, a grade 11 learner in one of the secondary schools in K-section was seriously injured and passed away at the hospital. A case of culpable homicide will be investigated.”