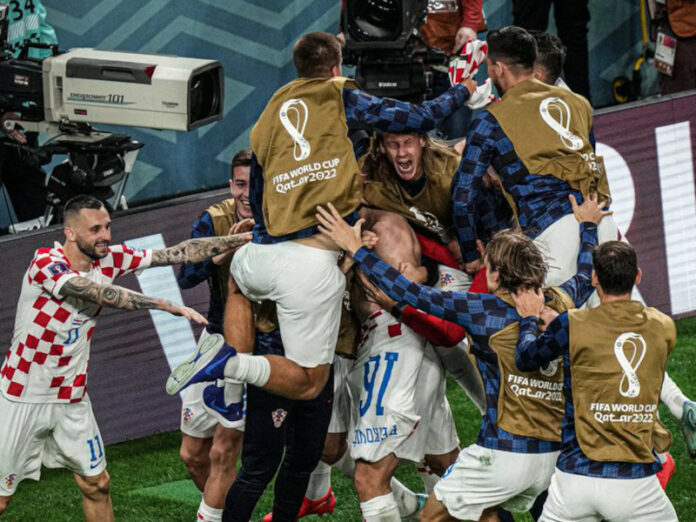 Croatia caused another major upset in Qatar on Friday night after defeating World Cup favourites Brazil 4-2 in a penalty shootout.

Brazil danced their way to the quarter-final, drawing widespread criticism from pundits and fans alike.

However on Friday night the opening stages looked as if Brazil would dance to yet another victory over the 2018 World Cup finalists.

But after the opening 10 minutes the mood in the Brazil squad turned sombre as Croatia’s masterplan to nullify them seemed to be working a treat.

Croatia allowed Brazil the ball on the wings before squeezing their attack once it narrowed into the box.

It was a defensive masterclass from the entire Croatian backline with the right-back Josip Juranović the standout, given that Brazilian winger Vinicius Junior would not track back to defend.

Brazil had several chances throughout the game but Croatian goalkeeper Dominik Livaković came to the rescue for his side, saving the opening penalty in the shootout as well.

The 27-year-old made over 10 saves throughout the game, arguably two or three being destined for the back of the net if it were not for his intervention.

Brazil manager Tite made a few changes earlier into the second half in a bid to spark life into the lacklustre performance of his team.

However it was not to be as the 90 minutes ended in a goalless stalemate.

Neymar would have felt he’d won it for Brazil after scoring a sensational solo goal in the 105th minute of the game, equalling Pele’s record of 77 goals for the country.

As the game went into the deeper stages, the Croatian side looked as if they would settle for penalties as their best chance to get the better of Brazil.

And that is exactly what transpired as Bruno Petković scored a late equaliser to take the game into a penalty shootout.

After Rodrygo had his first penalty saved, Croatia had the momentum and slotted home their four penalties before defender Marquinhos missed to send Brazil packing.