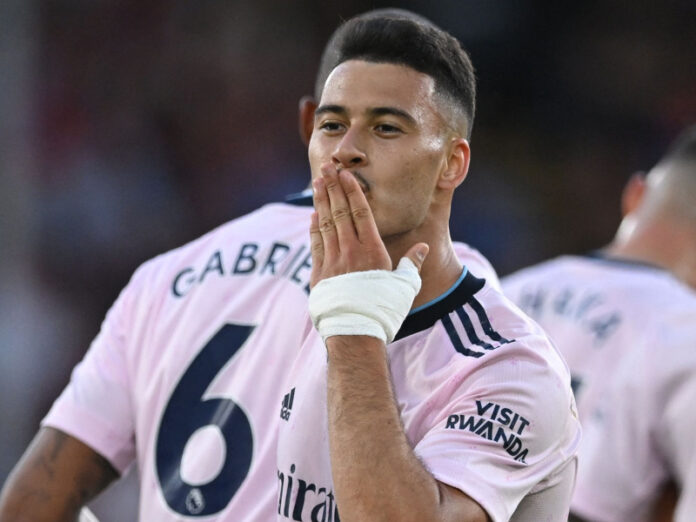 The Gunners opened the new premier league campaign with a 2-0 win over Crystal Palace at Selhurst Park on Friday night football.

The game delivered all the thrills one would expect from football’s greatest league.

Mikel Arteta’s side dominated proceedings from the onset with Gabriel Martinelli grabbing the opener 20 minutes in after an assist from new signing Oleksandr Zinchenko.

A deep cross from Bukayo Saka found the Ukrainian left back with the former Manchester City man heading the ball across goal to force a save from Vicente Guaita before Martinelli got on the end of it to give Arsenal the lead.

Patrick Vieira’s side improved as the game went on, forcing some good saves from Aaron Ramsdale at the back end of the first half and early on in the second period.

Palace thought they may have had a couple of penalties just before the hour mark when, first, Ben White flicked the ball with his arm and then when William Saliba slide tackled Wilfried Zaha in the area. Both shouts were waved away by referee Anthony Taylor.

With five substitutes now permitted, Viera made use of four of them in the final half hour though Arteta made just three — all in the final ten minutes of the game.

Edward Nketiah came on for the Gunners and made an almost instant impact, passing the ball out wide to Saka whose cross found the back of the net after taking a deflection off Marc Guehi.

The second goal left too much for Palace to do, with Arsenal seeing out the final moments to claim a clean sheet on the opening day.

Friday’s entertainment was only the beginning with Liverpool, Spurs and Chelsea all set to be in action on Saturday before the Manchester clubs take on Brighton and West Ham on Sunday.