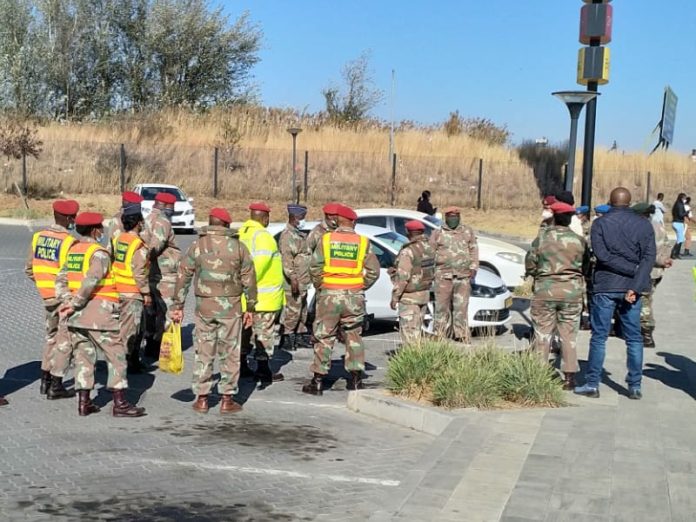 While Alex’s Pan Shopping centre was wrecked to the ground by protesters, about two kilometres away one mall has been standing untouched.

On Sunday night, gunshots rang from inside the mall gates as protestors charged in trying to gain access.

According to the Maintenance Manager, Fatima Chebeletsene, and centre manager, Lucky Mabilesa, the mall had recruited more armed security guards.

“We have more security guards after we heard a tipoff that the protesters were targeting our facility.”

Chebeletsene added that taxi associations also helped to keep the crowds from coming anywhere near the mall on the night.

People were seen carrying a whole skinned sheep from a butchery, fridges from furniture shops, baby disposable nappies, big bottles of cooking oil, and bags of rice and maize meal.

At approximately 10am, the protest gained momentum with police facing off against the protesters.

Police fired rubber bullets at the protesters who were breaking into ATMs. The crowd retaliated by throwing stones and firing live ammunition at the police.

By 1pm, the huge crowd charged towards the police, forcing the officers, security officers, and journalists to run for cover at high speed before calling for backup.

The township was under siege with spaza shops being targeted after police took control of the mall.

There was relief when word got around that the South African National Defence Force was going to be deployed in the troubled areas.

By the late afternoon, a handful of the army had already arrived in the township to help the police to control the situation.

The protests escalated to other parts of the city with Soweto’s Jabulani Mall, Maponya, and Bara being targeted as well.

In KZN, malls were looted and burnt. Even a coffin shop was broken into and looted.