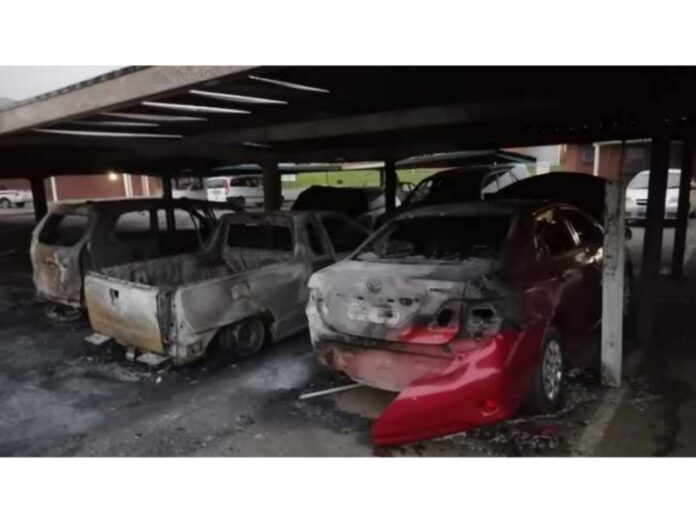 The Durban University of Technology (DUT) has revealed that 12 cars have been petrol bombed on its campus in the past week.

It’s believed the cars and a guard house were torched by protesting students.

On Monday morning a total of eight cars were torched at the Indumiso campus. Reports indicate that students who attempted to register for the university through the walk-in system were behind the arson attacks.

“A group of approximately eight to 10 suspects began throwing petrol bombs inside a guardhouse, which is situated near the pedestrian gate along Edendale Road,” reported DUT spokesperson Smagele Zuma. “At the time of the attack, a campus security guard was inside the house.”

“Luckily, he managed to escape unharmed and ran towards the DUT Protection Services offices to alert the security team,” Zuma added.

The group allegedly ran throughout the campus, setting fire to different cars before fleeing the premises in a getaway vehicle.

The Indumiso petrol bombing comes just days after four cars were set alight at the university’s Steve Biko campus, all of which belonged to university staff members.

The university was forced to close three of their campuses on 15 February because of the  arson attacks and will remain closed until the damage can be repaired.

KwaZulu-Natal police spokesperson Colonel Themba Mbele confirmed that one case of intentional destruction of property had been opened.

“It is alleged that in the early hours of this morning at 1.15am, a group of unknown people set alight eight vehicles and a guardhouse. Charges of malicious damage to property were opened at Plessislaer police station for investigation. Police are monitoring the situation,” said Mbele.