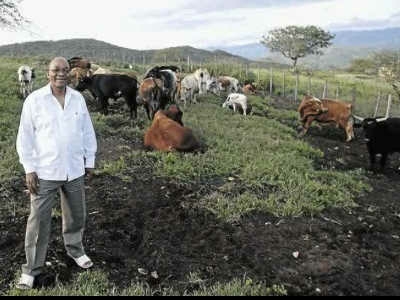 Jacob Zuma might be politically in the wilderness, but his cattle kraal at his Nkandla homestead is a busy place.

According to his brother Khanya, since the former president started hosting his now-famous tea parties last month, he has slaughtered close to 20 cattle.

Both his allies and enemies have flocked to his homestead in northern KZN, and every time a prominent person is there, the generous former president slaughters another cow.

Last month, EFF leader Julius Malema was the first to feast at Nkandla, the same place he once called a monument of corruption.

He was accompanied by the EFF former national chairperson Advocate Dali Mpofu who was seen licking his fingers in pictures that went viral.

Khanya, who also stays in Nkandla, told Scrolla.Africa that they would be slaughtering more cattle in the coming weeks for other guests.

“We don’t like our guests to leave our house without eating so we make food for them when they visit us.”

Earlier this week, SAA former chairperson Dudu Myeni visited Zuma and showered him with groceries – saying she did it because of the throngs of visitors.

Since tasting his cows, the ANC-aligned MK Veterans have put up a tent at the entrance to the house where they are staying. They have dared the law-enforcement authorities to arrest Zuma.

Zuma has defied a Constitutional Court order to appear before the state capture commission of inquiry and the commission chaired by Deputy Chief Justice Raymond Zondo asked for Zuma to be jailed for two years for defying a ConCourt order.

Zuma has until Monday to file his opposing papers in the matter that is set for 25 March.

Cele was welcomed with open arms and offered delicious fruit and juice. For Bheki Cele no cattle were slaughtered.

Zuma was said to be still bitter at those who orchestrated his demise as president in 2018 and Cele was one of them.