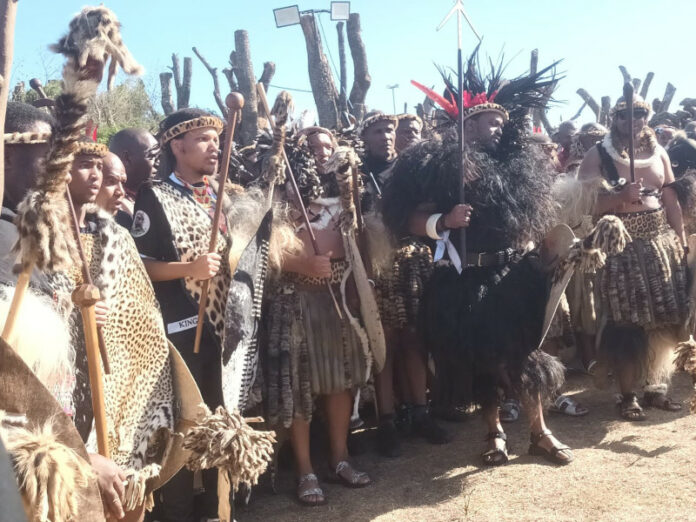 The Pietermaritzburg High Court has struck off the roll an interdict to block King Misuzulu kaZwelithini’s sacred Kraal ritual in KwaNongoma in Northern Zululand.

Unfazed by these attempts to sabotage the ceremony, thousands of Zulus flocked to KwaKhangelamankengana Palace and brought the town of KwaNongoma to a standstill.

The event started in the early hours of Saturday morning when His Majesty led amabutho (Zulu warriors) with the backing of his praise singer Buzetsheni Mdletshe.

Cameras and the media were not allowed into the Kraal during the one-hour long sacred Kraal ritual at 1am on Saturday.

On Saturday morning the program was opened to the public.

The sacred kraal ceremony resembled an official coronation as thousands showed support to the new king.

Three big marquees provided shelter to Amakhosi from different provinces, political leaders and business leaders who were part of the historic event which was last seen when the late King Goodwill Zwelithini KaBhekuzulu was appointed to take the throne in 1971.

About 26 cattle were slaughtered to feed the guests while maidens and amabutho entertained in song and dance.

A heavy police presence including a police chopper monitored the activities amid concerns for the safety of the king whose crown continues to be contested by two of his brothers.

Last week, a faction of the family declared Prince Simakade Jackson kaZwelithini the rightful heir to the throne but just a few dozen people attended his entrance to the kraal.

Prince Simakade is the son of King Zwelithini and his teenage lover Gugu Mthenjana.

On Thursday, Prince Mboniso, a brother to King Zwelithini KaBhekuzulu, announced Prince Buzabazi from kwaDlamahlahla Royal Palace as a contender to the throne.

He is the third son of King Zwelithini and Queen Buhle kaMathe.

At the heart of the battle to lead the 15-million-strong Zulu Nation is an estate estimated at over R350 million.

The King earns a R1.2 million a year salary and also receives a R67 million annual budget for the general upkeep of the Zulu Royal Household.

The second leg of the ceremony of entering the kraal got underway on Saturday afternoon.