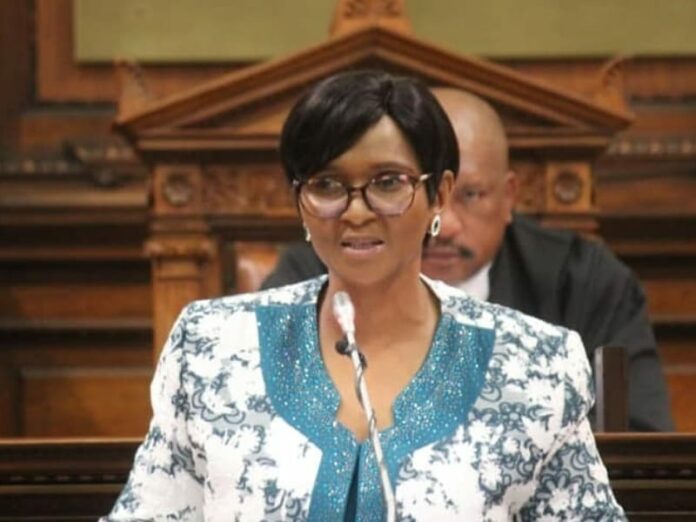 Sifuba’s hardcore campaign to be re-elected to the all-powerful Provincial Executive Committee (PEC) ahead of the chaotic last week’s conference, yielded no results.

The branches snubbed her.

At the disputed last conference in 2018, she was elected at number 27 on the PEC.

Sifuba, who is Speaker of the Free State Legislature, was mired in a sexual scandal after her private phone sex videos were leaked allegedly by a man who was extorting money from her last year.

It was alleged that the unknown man was demanding money which was said to amount to R300,000.

When she declined, the culprit released the videos where Sifuba could be seen touching herself, while the man – whose face could not be seen – stroked his manhood.

The video lasted two minutes but nearly cut Sifuba’s decades-long career short. However, her own comrades in the form of the ANC Women’s League rushed to her defence.

They claimed that this was an infringement of privacy and abuse by the alleged extorter.

She survived and remained as speaker of the legislature but the cloud of the scandal hovered over her head.

It is worth noting that her failure to be re-elected to the PEC cannot be wholly attributed to the sexual cloud.

Only three PEC members returned out of the 30 who were elected in the disbanded structure in 2018.

This is as all her other allies – including current Premier Sisi Ntombela, Ace Magashule’s die-hard backer – were also defeated in her contest to be the ANC chairperson.

With the new guard now in charge, the future looks bleak for Sifuba along with premier Ntombela – as calls have started for the new leadership to make wholesome changes to the provincial cabinet and legislature.

Judging from the animosity that exists between the Dukwana camp and Ntombela’s backers, the cabinet reshuffle is likely to happen in the next coming weeks.

For now, Dukwana assured Ntombela that she is still the premier of the province.

Pictured above: Zanele Sifuba fails to make the cut as PEC member