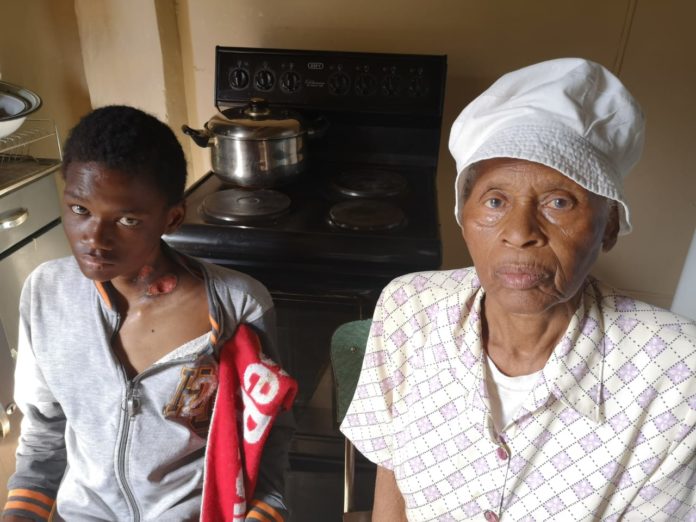 Last year, Boesman Skota saved two young sisters from drowning during the floods in Mangaung in the Free State.

Now the 17-year-old hero needs to be saved himself. He has gone deaf and his skin colour is changing!

“I’m in pain but I know God will help me,” Boesman told Scrolla.Africa.

“I did my best when I saved those kids from drowning and good things are coming my way. I will never give up on my dreams of becoming a police diver and saving more lives.”

In February 2019, Boesman risked his own life by throwing himself into a ditch filled with water and swam and pulled two girls to safety. While Boesman could not rescue the third sister, their family hailed him as their hero.

But Boesman, who said he wishes to become a police diver when he finishes school, has suddenly gone deaf and his skin is changing colour. He has wounds that are constantly bleeding.

His guardian, Agnes Nthabi, 80, told Scrolla.Africa she still regards him as a hero.

“But I think that water is responsible for his skin condition. He is deaf and we have to scream at him for him to hear us,” she said.

“He has stopped going to school as we fear that he may affect other kids. My son’s dream of becoming a police diver is disappearing in front of his eyes.”

She said the bleeding wounds keep him awake and he cries all night. “I don’t have enough money to take him to the specialist and it breaks my heart.”

Resident Paul Seotle, 33, said he wishes he had money to help Boesman.

“I was there when I saw him dive into the dirty water and swim to rescue the two girls. Everyone, including myself, was afraid of the water. Boesman deserves a better life than the one he is living now. He is in my prayers.”