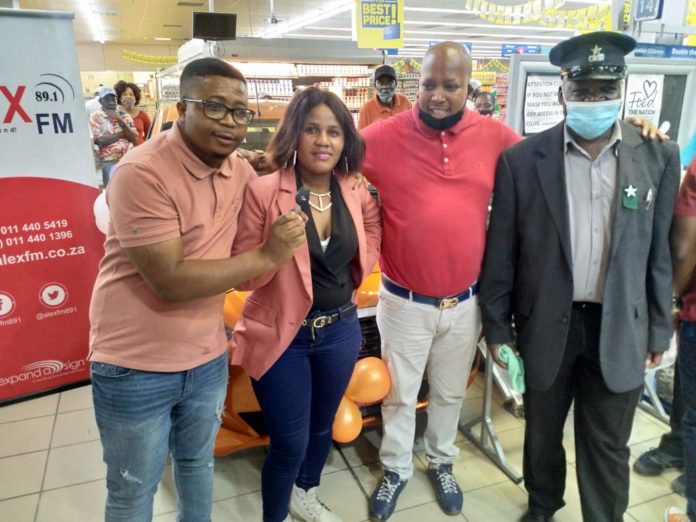 She only spent R219 at Pick n Pay buying groceries. And Queen has won a brand new car.

Queen is the owner of a brand new Datsun Go car that she won at the Pan Africa Pick n Pay Win-a-Car Competition.

The unemployed 28-year-old Queen Tsebe said although she won the car:

•    She does not have money for the car insurance

Queen, who lives in one of Alexandra’s congested squatter camps called Setswetla, could not believe it when the keys she chose in a raffle draw opened the car.

The last four contestants had to pick one of four keys. Whoever picked the correct one, won a car.

When she realised the key she picked could open the car, Queen screamed! She sat on the driver’s seat and called her grandmother who was back at home in Polokwane, Limpopo.

“My grandma raised me. She is so close to me. She had to hear the good news first,” said Queen.

She said she is the seventh child from a family of eight.

“My mother is not working. My father is a bricklayer who finds jobs once in a while. We grew up suffering. This is big in our family. This is the first car in our family.

“I cannot wait to give a ride to any of my family members, my siblings and my parents,” she said.

But before the dream of driving her family comes true, Queen has to learn how to drive first.

Pick ‘n Pay Pan Africa managing director Oliver Phaahla said this is one of the many competitions they run as a way of ploughing back into the community.

“We know and experience the effects of the Covid-19 pandemic on the residents of Alexandra. The shop was not as busy as it used to be before Ccovid-19 hit the shores of South Africa. People in the township had it hard. Many people suffered and are still suffering,” said Oliver.

The Win-a-Car Competition was run by Alex FM, a partner of Pick n Pay.

“We wish her a safe drive on the busy streets of Alexandra.”