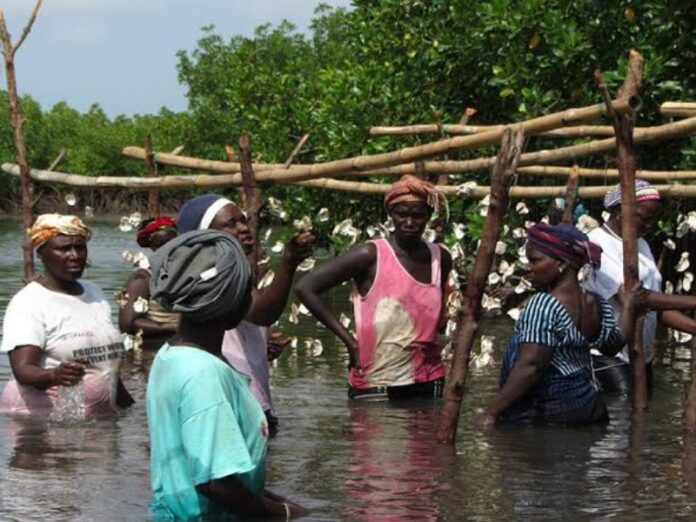 Ever since a social worker called Fatou Janha Mboob founded the TRY Oyster Women’s Association in 2007, Gambia’s entire oyster trade has been taken over by women.

They harvest them, process them, cook and sell them.

In 2012, Mboob successfully lobbied the Gambian government to give TRY members exclusive harvesting rights in the Tanbi area.

The all-female workforce is part of a visionary project committed to protecting the wetland forests.

In an interview with The Guardian, Mboob said she wanted to make the harvesters a cohesive part of the ecosystem, rather than acting against it.

On a normal day, if the tide remains low enough to work, the women will paddle their boats along Lamin Bolong, a tributary of the Gambia River for at least six hours collecting oysters from the exposed mangrove roots.

Once the tide rises and the mangrove roots are under the water again, the women start preparing the raw oysters on land by first steaming them in large steel drums, then removing the green-grey meat, which is flicked into wicker baskets.

Things have not always been easy for these women, they worked the mangroves differently, hacking off roots entirely and picking even small, unsaleable oysters, losing production in the process.

That’s when Mboob saw a need to organise educational initiatives with the United Nations Development Programme (UNDP) where members were taught how to harvest the oysters without hacking off mangrove roots.

The prepared oysters, filled in baskets are taken to the roadside and markets at the country’s capital of Banjul where they are sold.

But Mboob says they now need a processing area where they can vacuum pack the oysters and sell them in supermarkets, hotels and local restaurants.

“You can’t take oysters sold at the roadside and sell them to the supermarket,” she said.

Mboob’s efforts did not go unnoticed. In 2012 she received the Equator prize from the UNDP Equator Initiative.

And in 2019, her leadership was recognised when she received the Young Business Innovation of the Year award from the Global Youth Innovation Network Gambia.

On a good day, each of the ladies might harvest, steam and shell enough oysters to make R600.

“We want people to know that the harvesters matter. They’re the ones who protect the environment, who protect Tanbi and the mangroves. The harvesters take care of each other. Because of that, and their hard work, they are empowered,” Mboob told The Guardian .