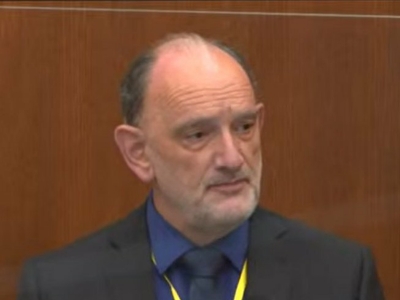 America’s racially charged trial of the Minneapolis police officer charged with murdering a black man, George Floyd, by kneeling on his neck for nine and a half minutes, got its South African moment on Wednesday.

A Zimbabwean born, University of Cape Town trained doctor David Fowler testified in defence of the white police officer, Derek Chauvin, that Floyd had died as a result of a cardiac arrest, or heart attack, as well as inhaling a car exhaust and being high on fentanyl.

Fowler’s testimony cut against those of other prosecution witnesses, who said everyone dies of cardiac arrest because their heart stops. The knee on the neck, they argue, is why Floyd’s heart stopped.

Many posters on social media went to town on Fowler’s South African connection. One wrote: “I don’t know Dr David Fowler, but I’m not sure the optics are great having a white witness for the defence who grew up and graduated in Cape Town during the height of apartheid South Africa.” Other comments were even less charitable.

Fowler’s testimony is important because deciding the ultimate cause of death is one of the major questions before jurors in the trial.

Under withering cross-examination from the prosecutor Jerry Blackwell, Fowler’s assertions were, in the words of former US attorney Glen Kirschner, ”torn down brick by brick.”

It turns out that Fowler, the former chief medical examiner of Maryland, is facing civil rights charges himself for allegedly helping to cover up the police’s role in the death in custody of a 19-year-old black man, Anton Black, in 2018.

The jury in the Chauvin case will begin deliberating early next week in one of the most closely watched trials in decades. Floyd’s death was the spark for the Black Lives Matter protests last summer, the largest mass organised protests in the history of the United States.

Meanwhile, Kim Potter, a police officer who earlier this week fatally shot Daunte Wright, a 20-year-old black man, at a traffic stop, was charged with manslaughter on Wednesday. The killing has led to several nights of angry protests in the town of Brooklyn, Minnesota.