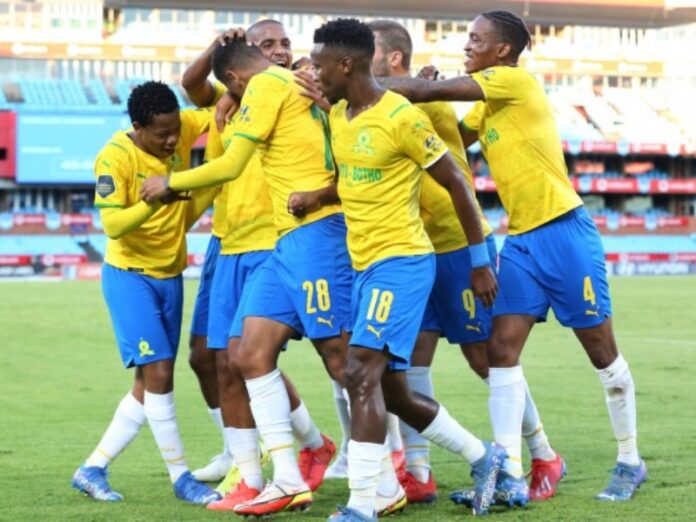 Mamelodi Sundowns have made history by becoming the first team to win the DStv Premiership championship five times in a row.

Sundowns were held at home to a 0-0 draw by Cape Town City on Wednesday night, but the scoreline was enough to see them claim the Premiership title yet again.

The yellow nation supporters were present at the Loftus Stadium to celebrate the historical moment with their team.

The point brought Downs’s total to 58, and the Pretoria-based side will now chase their 70-point haul as the season comes to an end.

Sundowns knew that a point would be enough for the title, and they played that way, not breaking a sweat throughout the encounter.

Last week Downs disappointed their faithful after being eliminated early in the CAF Champions League by the low ranked Petro de Luanda from Angola.

Meanwhile, Orlando Pirates have moved to fourth place after they were held at home by Chippa United.

The Bucs were in fifth place before they drew 0-0 with Chippa at Orlando Stadium on Wednesday night.

They leapfrogged their Soweto rivals Kaizer Chiefs who lost 2-1 to Golden Arrows earlier.

This was Amakhosi’s catch up match after they didn’t honour the first games against Arrows in December due to a Covid-19 outbreak in Naturena.

With just four games to go, the race for the final Champions League spot between Royal AM, Cape Town City and Orlando Pirates will go right down to the wire.