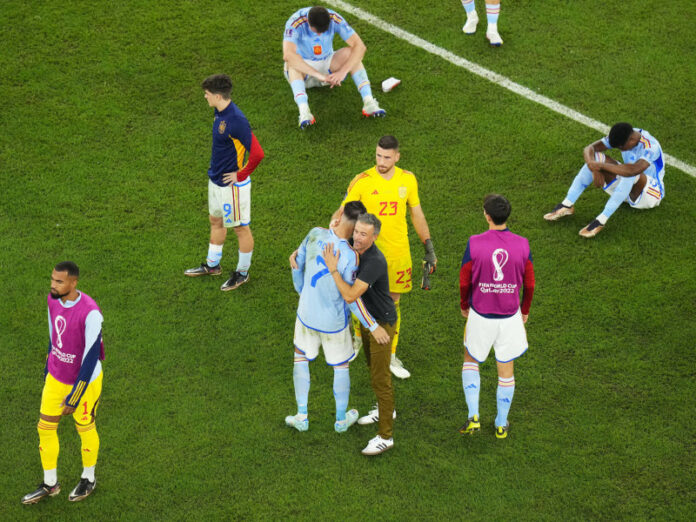 Spain head coach Luis Enrique told his players to practise 1,000 penalties to prepare for their clash against Morocco, which ultimately backfired.

When the World Cup reaches the knockout stages it is crucial that sides make sure they have practised enough penalties in case a game is to be decided by spot kicks.

No team in Qatar would have practised their penalties more than Spain, yet they crashed out without scoring a single one of their three attempts on Tuesday night.

Spain went into the round of 16 with a poor penalty shoot-out record but Enrique had a plan to prevent that from being the case.

“I imagine that they have done their homework. Over a year ago, in one of the Spain camps, I told them they had to get here with at least 1,000 penalties taken,” the coach said ahead of the fixture.

“If you wait until getting here to practise penalties, it won’t be enough. It’s a moment of maximum tension, a time to show your nerve and that you can shoot the penalty in the way you have decided.”

However, despite the huge number of penalties taken in preparation Spain lost their fourth World Cup penalty shoot-out.

The problems may go beyond the penalty spot as Spain put up a mediocre performance against a side they were favoured to beat.

The 2010 World Cup champions had 77% possession throughout the game yet only managed to put two of their shots at goal on target.

Spain’s dull showing allowed Morocco to become only the fourth African side to reach the quarter-final stage of a World Cup.

Enrique was unsure of his future at the helm of the Spanish national team.

“I can’t say, because I don’t know,” Luis Enrique told a press conference when asked about his future.

“The national team has time. I am very happy with the Spanish FA, the president and the sporting director. If it was up to me I would stay all my life, but that is not the case.”

Spain are now without a World Cup knockout stage win since they won the tournament in South Africa 12 years ago.

Pictured above: Luis Enrique consoling his players after their loss