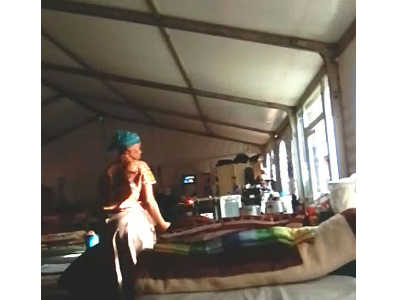 After more than two years of living in a government tent, about 120 Umlazi residents have been told they will be moving to a transit camp.

The residents, including children, were hoping that the eThekwini Municipality would rebuild their houses that were destroyed by floods in 2019.

Since Ntombenhle Ntendeni’s two-roomed mud shack was washed away in the floods she has stayed with her three children in the tent that was erected outside Tehuis hostel near Mega City mall at Umlazi V section.

“I’m glad to be alive. Many people lost their loved ones during the floods,” she said.

“But I don’t want to go to a transit camp. We will never have a place to call home again,” Ntendeni told Scrolla.Africa.

The tent is divided into a male and female section. When they bath, they have to look out for prying eyes.

“We don’t have running water, and there are no ablution facilities. There is no social distancing,” she said.

“We hear that the municipality was told about us, but no one has listened to us. No one cares.”

Another resident said the ANC government only cared about itself. She said the government had promised to build houses for them when the floods hit the township.

“We want the government to build our houses and not place us in transit camps,” she said.

Vanessa Burger, who had helped the victims, said they were understandably appalled.

“Why has the municipality seemingly prioritized the construction of new transit camps instead of permanent housing?”