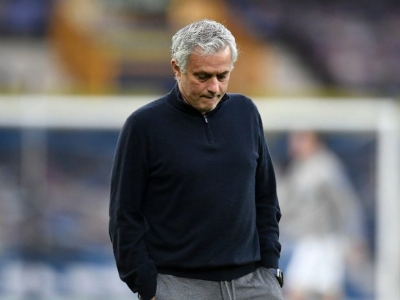 Portuguese manager Jose Mourinho has been sacked by Tottenham Hotspur after poor performances have left the club in an unfavourable position.

Mourinho’s position came under fire after his side let a 2-0 lead slip in their Europa League Round of 16 tie against Dinamo Zagreb. Spurs also find themselves in seventh position in the English Premier League table, four points off Chelsea in fourth.

The former Chelsea and Manchester United manager began criticising his players for the club’s poor performances which is never a good sign from the manager.

The 58-year-old manager did guide the side to a Carabao Cup final place which is set to take place this Sunday 25 April which could save the London club’s season as they are without a trophy in over a decade.

The club tweeted the news on Monday morning, they said: “The Club can today announce that Jose Mourinho and his coaching staff Joao Sacramento, Nuno Santos, Carlos Lalin and Giovanni Cerra have been relieved of their duties.”

Chairman of the club, Daniel Levy said he is disappointed that the relationship between Mourinho and the club could not reach the heights they had imagined but the Portuguese manager will always be welcome at the club, thanking the staff for the work they did in some of the club’s toughest periods during the ongoing pandemic.

Early reports that Mourinho’s dismissal was linked to Tottenham’s participation in the ESL have since been dismissed.