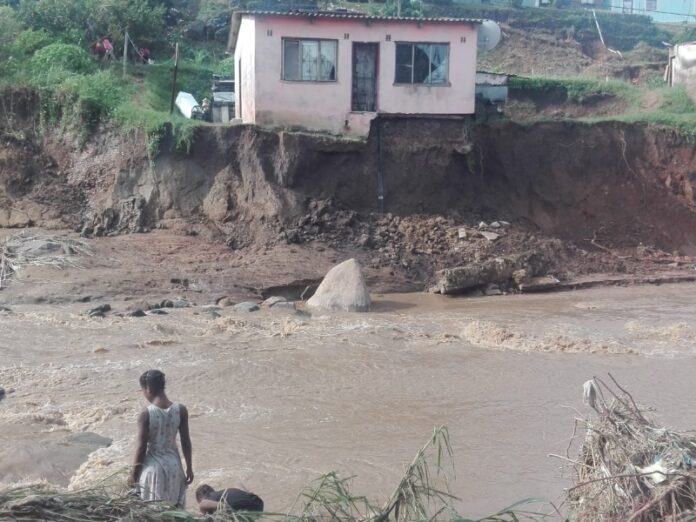 Phumelele Linda from Ntuzuma told Scrolla.Africa that she lost everything in the floods – but  thanked God for saving her life.

An estimated 45 people have lost their lives in severe weather across the province of KwaZulu-Natal.

Linda said that at around 11pm on Sunday she was woken by a huge bang. “My two children were screaming for help. I witnessed my furniture washed away with important documents such as IDs and SASSA grant cards,” she said.

“Durban is known as one of the biggest cities and everyone is seeking job opportunities. Most of us normally erect shacks where there is vacant land,” she said.

As a result of heavy rain in Durban, bones of some of those buried at a cemetery in Ntuzuma D section, at Lindelani informal settlement, have been exposed.

The area has been severely affected by the heavy rains. The cemetery has flooded, leaving some graves excavated.

Buyie Mkhize, who was also affected, said she found herself and the entire family looking for ward councillor contact numbers.

“We couldn’t go to work, there was no public transport, the electricity went off, everything was a mess up,” she said.

Rescue teams were deployed across the city and its outskirts, rescuing people stranded on rooftops and trapped beneath tons of sand and rubble after houses were washed away.