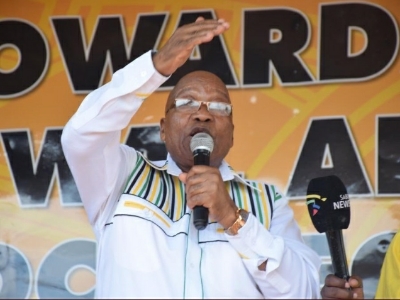 When Jacob Zuma faces a legal revolt, he resorts to accusing the judiciary of being unfair to him, and his supporters follow him.

Monday was no different after the former president launched a blistering attack on the country’s judiciary system in a 12-page statement.

Without mentioning names, he accused some judges of helping President Cyril Ramaphosa cover-up what he said seemed like bribes to win the ANC conference in 2017.

“We sit with judges who have assisted the incumbent president to hide from the society what on the face of it seem to be bribes obtained in order to win an internal ANC election.

“We sit with judges who sealed those records simply because such records may reveal that some of them while presiding in our courts have had their hands filled with the proverbial 30 pieces of silver.”

His utterances were triggered by Deputy Chief Raymond Zondo’s announcement that he would ask the Constitutional Court to arrest Zuma, following his snubbing of the state capture commission of inquiry on Monday.

Zuma was set to appear at the commission for the whole week.

The bullish Zuma maintained that he respected the law, but was fighting against “lawlessness judges”.

He said: “It is not the law that I defy, but a few lawlessness judges who have left their constitutional post for political expediency. I protest against those in the judiciary that have become an extension of political forces that seek to destroy and control our country.”

Zuma described the Constitutional Court order telling him to go back to the state capture commission as a travesty of justice.

“None can claim not to see that the recent judgement of the Constitutional Court is a travesty of justice.”

The Gauteng High Court Judge President Dunstan Mlambo was not spared Zuma’s vitriol. He was accused of “flip-flopping” when it came to judgements involving him.

Mlambo has yet to respond.

Zuma said there were inconsistencies in the judiciary that applied only to him, vowing to fight back.

“He is clearly not leading by example as a former president of the country. He is at odds with the same Constitution he took an oath to protect.”