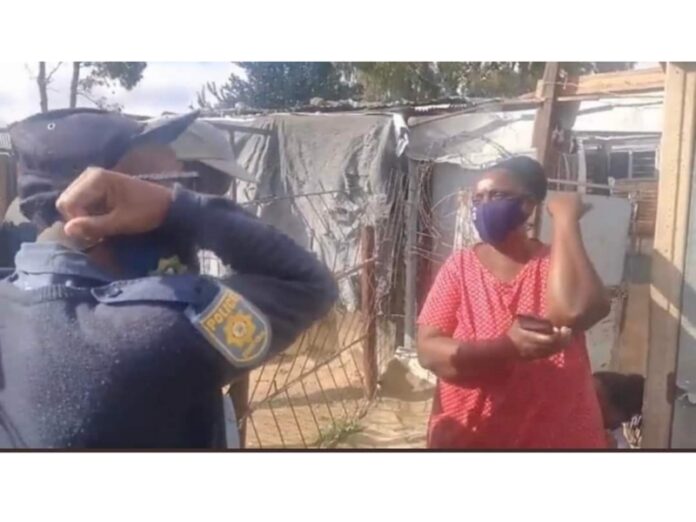 Some people have laughed it off as the new SAPS dance move while others have condemned recent reports of police officials asking foreign nationals local terminologies in order to identify their nationality.

A photo taken in recent weeks appears to show a police officer in uniform asking an elderly lady how to say “elbow” in a South African language, as both are gesturing towards their elbows. If the old woman was to fail this test, she would be wrongfully detained as an undocumented foreigner.

Commentators have condemned the unofficial practice calling it a nonsensical exercise which recalls the racist days of apartheid when different practices were used by authorities to segregate races.

It has been noted that asking someone to say elbow to determine their nationality, and arresting them if they fail, is as nonsensical as pushing a pencil through someone’s hair to determine if they are black.

With the government clamping down on undocumented foreign nationals in many parts of the country, there have been pictures circulating on social media on how to tell whether someone is local or foreign.

Language expert Vonisani Jimbo Mabunda said that if the police are using the elbow test, the SAPS have lost it.

“No one in South Africa knows all the languages,” Mabunda explained.

“This shows the incompetence of our law enforcement who should be resourced to do their job efficiently,” he said.

Mabunda said it was only during apartheid that this kind of racist tactic of humiliation was used.

Mabunda said the government should come up with plans on how to help those who don’t have papers in the country and address the issue of border management to control migration.

The police ministry has said all people are supposed to carry their ID with them. Failing to produce such documents when asked by the authorities, one faces immediate detention.