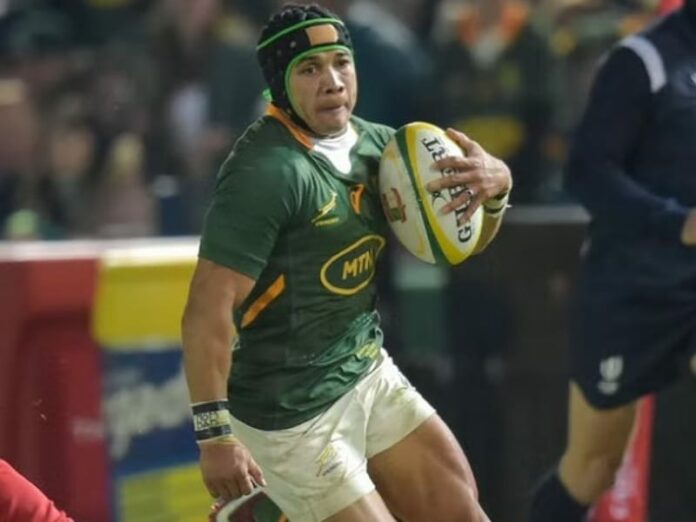 ON THE BALL: You would think that enough has been said about the card system, but no! There’s more, writes Lucky Maree.

The match, France vs South Africa, was a tense affair on Saturday night and it was great. That is as it should be, but it was also for the wrong reasons.

Who can forget the sight of Peter-Steph du Toit sitting on the naughty chair, his head down and (sadly) his face contorted as he cries in frustration, wiping away the tears.

The card system does much more damage than merely destroying a player’s game, but it certainly symbolises the agony a player feels when being red-carded after ten minutes.

South African rugby fans know the uphill journey that Du Toit faced to get to run onto the Stade Vélodrome in Marseille on Saturday night to face one of the great French rugby teams of the century.

Watching the replay of the incident it is clear that the tackle was head-high. The fact that both players were no more than a metre off the ground at the moment of impact clearly doesn’t make any difference – especially not to referee Wayne Barnes.

But if you watch it a hundred times, you will not convince anybody that Du Toit deliberately wanted to hurt the other player.

Cheslin Kolbe runs in and goes up very high to take the ball. French captain Antoine Dupont does not go up. He stays on the ground and it even looks as if he turns away from the flying Kolbe. Kolbe hits Dupont on the shoulder with his legs, flips over backwards and for a fraction of a second Kolbe’s entire rugby career is in the balance. He crashes to the ground and falls onto the back of his neck. He clearly couldn’t carry on playing but it is a testament to his fitness that he could get up and walk away. He could have been dead. This is exactly what should never happen in a rugby match.

Again, there is clearly no attempt by Dupont to deliberately hurt the other player. In fact, you can ask the question, what the hell was Dupont supposed to do?!

In spite of the fact that Wayne Barnes seems to enjoy waving cards around, he is not the one who should shoulder the responsibility for sending players off the field.

The problem lies in the card system itself. It is a device used in soccer and that is where it should have stayed.

The ref’s job is an impossible one. Rugby is a complex game. This is understood. When was the last time a referee had a perfect game? It is almost impossible. But the ref should be relieved of making game-defining decisions on the field.

Barnes will say it isn’t so, but it’s hard to believe that 60,000 hissing and whistling French spectators in the stands had no influence on his decision to red-card Du Toit. Again Barnes will deny it, but it’s hard to believe that his decision to red-card Dupont wasn’t, in turn, influenced by the red card that ended Du Toit’s match.

Please, World Rugby. There is still time. Replace the card system with a citing system. Let the ref cite a player and let a panel, away from the hissing Frenchmen, decide the sanction the player should receive. Everybody knows that World Rugby is ego-driven. But just this once, can’t they do the right thing? Get rid of the cards and save rugby! It’s urgent!