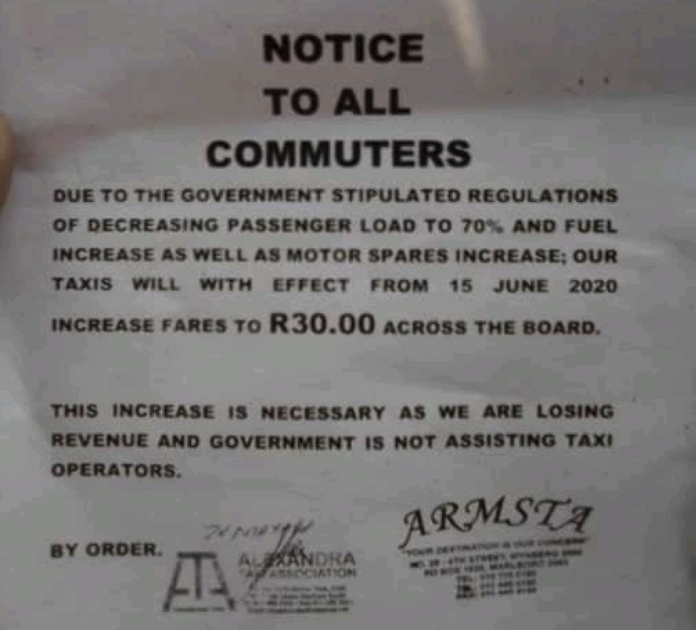 Johannesburg taxis are doubling their fares and some are making passengers pay a new super high flat rate.

Taxi bosses in Alexandra say the huge increases are necessary because of government coronavirus rules on passenger numbers, and the higher costs of fuel and parts.

In Alexandra, a new flat fare of R30 is kicking in on June 15th. At the moment passengers are paying between R13 and R16 to go to nearby areas like Sandton and Bryanston. Now they’ll have to pay R30.

Alexandra Taxi Association chairperson Vusi Mayaba says it has been hard to run the business during the lockdown – with government limited times and passenger numbers “many taxi operators are suffering”.

The fare increases will hit commuters already struggling to keep their jobs and feed their families during the lockdown.

Samantha, a commuter who works in Bryanston as a domestic worker for R2500 a month, says she’ll have to quit if the price hike happens. “I will be working for mahala. I cannot be working and spending all my money on transport. There are people I look after with the remaining few amounts.

“The price hike will leave me with nothing,” she said.

Tshegofastso Moagi says she uses two taxis a day each way for work, so it will cost her R120 a day.

We will be reporting on other taxi operators’ fares in other areas of SA.