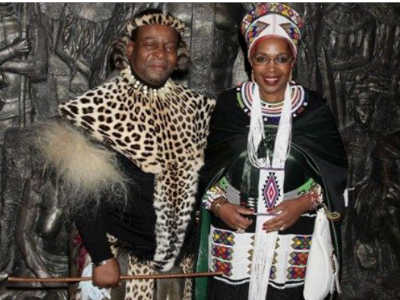 Revered Swati monarch King Sobhuza II himself couldn’t have dreamed that at one point his son and daughter would rule both the Swati Kingdom and the Zulu Kingdom at the same time.

The death of Zulu King Goodwill Zwelithini has pushed his wife, Queen Mantfombi, to the fore as the regent until a successor is named.

Queen Mantfombi (above with King Zwelethini) is the sister of King Mswati III and the daughter of King Sobhuza II.

Poor succession planning in the Zulu Royal family has made the house of King Sobhuza the most powerful African Traditional house in Southern Africa.

It is not yet clear whether Queen Mantfombi’s son Prince MisuZulu will be the next King of the Zulus.

The Zulu nation is likely to know by Wednesday who will take over from the late King Goodwill Zwelithini kaBhekuzulu.

The royal house has been locking horns over the succession plan.

In a statement released on Sunday, Prince Mangosuthu Buthelezi, traditional minister of the Zulu monarch, confirmed that a meeting was held by senior members of the royal family on Saturday.

He said various matters were discussed, including King Zwelithini’s will, which was expected to name his successor.

The meeting was held at KwaKhethomthandayo Royal Palace in Nongoma, north of KZN.

Buthelezi said he would update the nation after the meeting.

Queen Mantfombi tied the knot with King Zwelithini in 1971, the same year he was installed as king.

According to historian and author Zoza Shongwe, a woman has been regent before.

When King Jama kaNdaba died in 1781, his daughter Mkabayi  Mkabayi took over as a regent leader as Jama’s son Senzangakhona was still young at the time.

Normally, Shongwe said, the child of the king’s first wife, who comes from a royal family, like Queen Mantfombi, took over the reins when the king died.