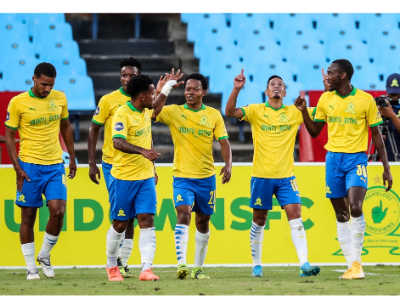 Mamelodi Sundowns continued to dominate the DStv Premiership while Kaizer Chiefs stumbled at home. Both teams were back for domestic duties on Tuesday after continental engagements last weekend.

Masandawana were looking for maximum points to open up the gap on top given that Golden Arrows and AmaZulu, tied in second, were closing in.

Now the gap is six points but Sundowns have played two games less then the Durban outfits.

Sundowns also maintained their unbeaten run in the league – the only side who have yet to lose – after 19 matches.

Masandawana are now on an unbeaten run that has stretched to 28 games across all competitions this season.

The Tshwane side started the match slowly and found themselves chasing from behind with Thembisani Nevhulamba giving the home side the lead in the 17th minute.

But Downs managed to equalise before half time with defender Rivaldo Coetzee to go to the interval 1-1. In the second stanza the reigning champions took charge of the proceedings and were rewarded for their efforts.

In the 61st minute Downs were given a penalty after a foul on Themba Zwane by Lehlohonolo Nonyane. But Gaston blasted the ball to miss a target.

Meanwhile in Soweto, Chiefs were held to a thrilling 2-2 draw by Stellenbosch. Nkosingiphile Ngcobo helped Amakhosi to salvage a point with a 85th minute equaliser.

All goals came in the last 20 minutes of the match with Stellies breaking the deadlock in the 72nd minute. Nathan Sinkala put them ahead while Leonardo Castro equalised for Chiefs five minutes later.

In the 79th minute Phathutshedzo Nange restored the visitors’ lead but it was Ngcobo who had the last say five minutes before time.