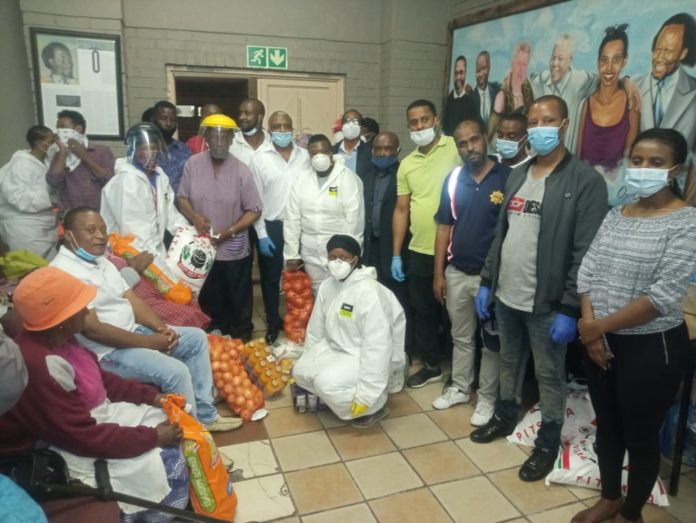 Jesus tells the story in the Bible of a traveller, a Jew, who was beaten on the road.

The traveller was then helped by a Good Samaritan, even though the Jews and the Samaritans were enemies.

The Samaritans in Alexandra this week were spaza shop traders of the United Ethiopia Community Association.

These Ethiopian traders, often the targets of xenophobic attacks, donated food parcels and protective kit to residents of an old age home in Alex.

The elderly men and women of the Phuthaditjhaba Home for the Aged could not hold back tears of joy when the Ethiopians gave their food parcels.

The groceries and protective kits against the coronavirus were worth over R30 000.

Winnie Madlala, one of the 50 residents of the home, says they were overwhelmed when the spaza shop owners made the donation.

The 84-year-old had kind words for the traders.

“They are the same people who sell to us groceries at affordable prices in our township.”

As the Ethiopian delegation arrived, other Alex residents queued outside the Phuthaditjhaba Home – hoping to get food too.

Linda Twala, who looks after the elderly at the centre, says: “We appreciate that the Association is helping the people of Alex.

“The pandemic needs unity and working together.”

The Ethiopian group was escorted by the police and army when they brought the goods from their office in Wynberg.

Deputy Chairperson of the United Ethiopia Community Association, Nawami Mussa, told Scrolla.Africa: “The donation is to show that we are all humans and we are faced with one enemy.”

The first major xenophobic attacks in South Africa started in Alexandra in 2008, when a Mozambican national was burned alive. Since then many of the Ethiopian, Somalian, Bangladeshi, and other foreign national spazas in Alex have been looted – either in xenophobic attacks or in service delivery protests.

One of the residents at Phuthaditjhaba, Lizzy Mokgobane, says she was sad to see young people robbing spaza shop owners – even if part of a protest for service delivery.

“The traders would even give us what we want from their shops on credits. They are very helpful,” she says.