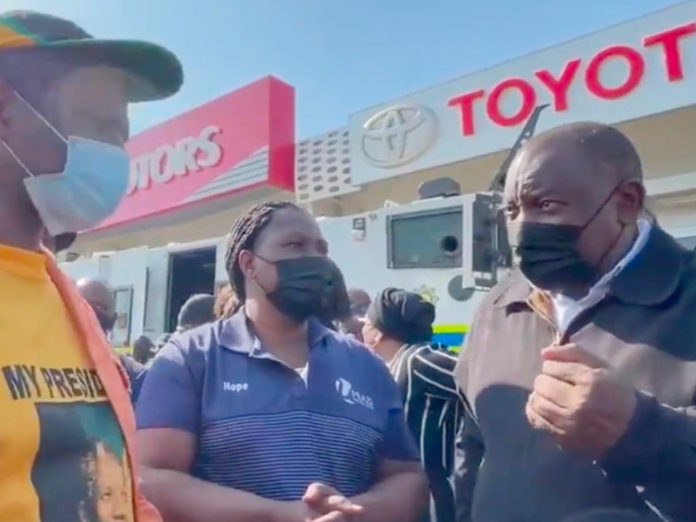 The rioting and looting of the past week has put South Africa’s constitutional democracy under threat and been designed to provoke a “popular insurrection”, says President Cyril Ramaphosa.

Addressing the country on Friday night, Ramaphosa said the riots were part of a “well-planned” attack on our country.

“Through fake news and misinformation, they have sought to inflame violence. They have sought to manipulate the poor and vulnerable for their own benefit,” he said. “The current instability constitutes a direct contravention to the rule of law. These actions are intended to cause social instability, severely weaken the democratic state and our economy.”

The majority of violence was in Gauteng and KZN, where 180 cases were reported. Over the last week 161 malls, 11 warehouses, 8 factories and 161 liquor outlets were destroyed, he said.

“The streets and building bear the scars of mayhem. But what is more scary is the toll it has taken on people’s lives,” he added. “The human toll will take much longer to repair.”

Ramaphosa promised to “find those who instigated this violence” for the “economic sabotage” they have unleashed on the country. He was speaking at the Union Buildings after visiting Kwamashu, Mobeni, uMlazi and Springfield in Durban.

“We will extinguish the fires, and we will stamp out ever ember of this fire. We will act against those who lit the flame and those who spread it,” he said.

“We will spare no effort in bringing those individuals to justice.”

He admitted that the security forces had been wrong footed and said he’d authorised the deployment of 25,000 members of the South African National Defence Force to support the work of the police.