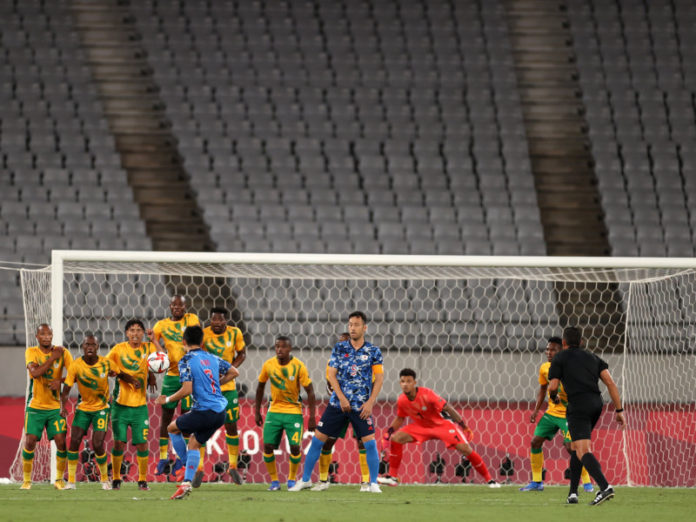 The South African football team started their match against Japan at the 2020 Tokyo Olympics on the back foot when two players and a video analyst tested positive for coronavirus following their arrival at the Olympic Village.

This was followed by 21 members of the team named as close contacts on Monday, forcing them to miss two training sessions as they isolated themselves in their rooms.

Coach David Notoane will have a lot of head-scratching to do after his team suffered a 1-0 defeat to Japan in their opening fixture of the Olympics.

Japan dominated the encounter with Notoane having Ronwen Williams to thank for keeping his side in the game for the majority of the clash. But the wall finally broke in the 70th minute when Takefusa Kubo opened the scoring with a lovely finish into the bottom corner of the net.

South Africa attempted to play on the counter attack without success with their best chance coming in the 77th minute but captain Repo Malepe sent the ball straight at the Japanese goalkeeper.

The last 15 minutes of the game saw the South Africans throw everything into their counter attacking style of football, leaving their defence wide open but in the end it didn’t matter as they failed to score.

All is not lost though. South Africa face France in a must-win game on Sunday if they are to stay in the tournament. Kickoff is at 10am.