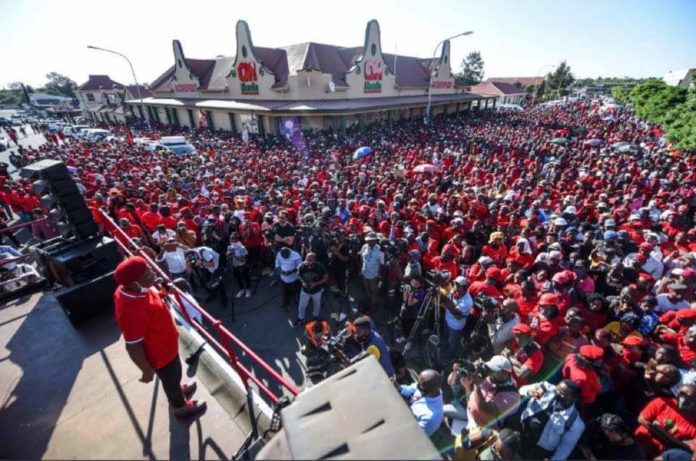 Tensions were high as the khakis and the reds came toe-to-toe in the little town of Senekal in the Free State on Friday.

But the leaders of both the Economic Freedom Fighters (EFF) and the white farmers intervened to get their members to cool off and stand down.

The confrontation between the two sides happened as two men, Sekwetje Mahlamba and Sekola Matlaletsa, appeared in court on Friday to apply for bail.

They were remanded in custody and the case was postponed until Tuesday.

The men are accused of murdering a 21-year-old farm manager Brendin Horner.

This time the farmers were outnumbered by a sea of red as the EFF bussed in members from around the country.

The farmers were also met by police roadblocks and searches for firearms, which were confiscated. One person was arrested for possession of an unlicensed firearm.

EFF leader Julius Malema, who addressed the crowd in the scorching heat, said: “The EFF are here to defend the revolution.”

The tension however, didn’t get out of hand despite a few instances of stone throwing between the EFF members and the farmers.

Local resident Toeks Henning said they are here for peace.

“”People were expecting that there will be trouble here, but as farmers, we are not here for trouble, we are here to show support.

“”We are not here to fight or to break things. We are fed up with farm murders and we just want to show that we don’t want crime here.”

Also present were Police Minister Bheki Cele and State Security Minister Ayanda Dlodlo, as well as Democratic Alliance member Helen Zille who was calling for an end to farm murders.

On Wednesday people of all races gathered at a local stadium to pray for peace.