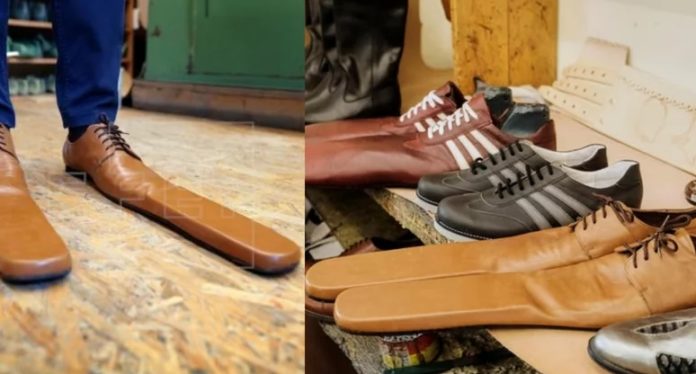 After a Romanian shoemaker noticed that people weren’t taking social distancing seriously enough, he designed a pair of shoes that would force them to.

Grigore Lup has been crafting leather shoes for 39 years, but in 2020 he made his first ever pair of European size 75 leather brogues.

The shoes are made of almost one square metre of leather, and are designed to prevent their wearers from getting too close to others.

“If two people wearing these shoes were facing each other, there would be almost one-and-a-half metres between them,” Lup explained.

When the pandemic hit, the shoemaker, whose shop “relies heavily on custom orders from theatres and opera houses across the country” according to Reuters, saw his business impacted.

Since the pandemic hit, however, the opportunistic craftsman has found a way to prevent the spread of Covid-19 and improve his business at the same time.

Lup has reportedly received five orders for the $115 shoes, which take him two days to make.

This means that two pairs of people can currently stand opposite each other and social distance effectively.

However, Rup is yet to come up with a way for wearers to walk up a flight of stairs without any awkwardness.