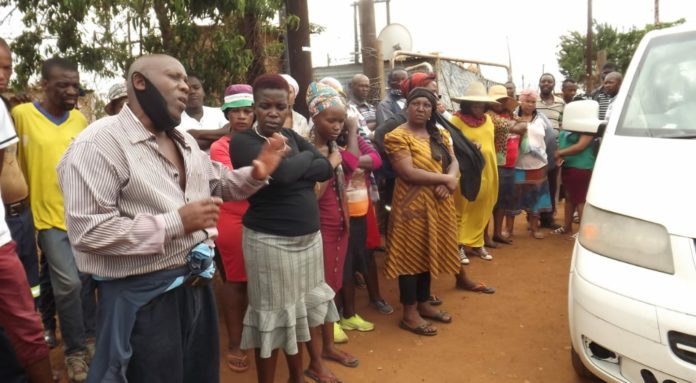 Residents of informal settlements in the West Rand of Gauteng are living in fear of a Basotho gang that’s been terrorising them.

Residents of Tambo, Mandela, Spooktown and Silver City in West Rand Gauteng say bullets have been flying through their shacks and houses. They say they are terrified to switch the lights off at night.

Police confirmed that there is fear in the community as the men, who cover themselves in blankets, rob and attack.

The Basotho gang groups are known with nicknames such as Bomayeu or Bo ngwana Mme.

In addition to targeting the community, it appears the gangs might also be fighting amongst themselves.

A resident Ntombikayisi Majolo said she is so frightened, she no longer watches her television soapies at night.

Recently, two bodies of a woman and man were found dumped in Spooktown near the cemetery.

Ntombikayisi says that on the night the cops discovered the bodies, she heard a woman screaming for help minutes after gunshots went off.

“We feared to go outside because we could hear the noise of angry men talking. Peeping through the window, I saw some hiding in the dark corners of the streets,” says Ntombikayisi.

Kwanele Mthombeni says she is afraid that she will lose her job because she cannot wake up early – for fear of running into the men in blankets.

“If you don’t give them what they want they rape and kill you as a woman. It is very sad living in this area,” she said.

One ANC ward councillor, Thabane Mngomezulu, says he patrols the area at night, but that the violence is continuing despite the efforts of the police.

“The gang groups are up to a war with innocent residents. I can’t leave the people who voted for me vulnerable.”

He said there were rumours that the gangs were also “fighting among themselves for the gold dust they scavenge for in the deserted mines”.

“Their anger has stolen the peace of the people,” he said.