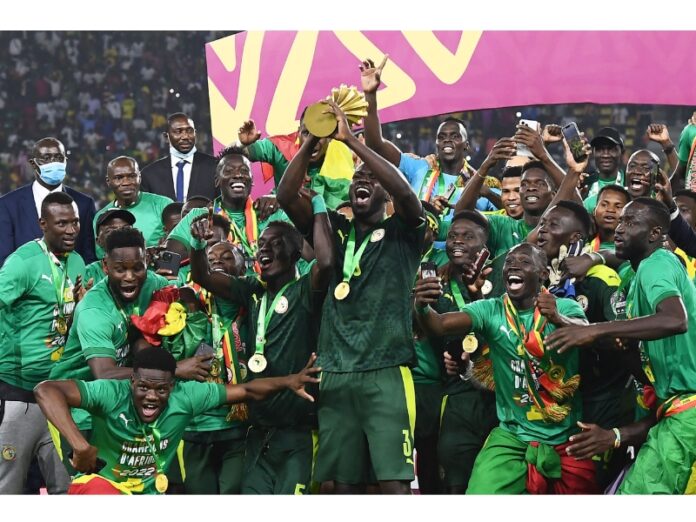 Third time proved to be the charm for Senegal as they defeated Egypt 4-2 on penalties to become champions of Africa for the first time in the country’s history.

The Lions of Teranga had so narrowly missed out on winning the Africa Cup of Nations on two separate occasions before they took on Egypt at the Olembe Stadium for this year’s tournament’s final.

Senegal looked to have been handed the lead as early as the fourth minute when Saliou Siss was brought down in the Egypt box and South African referee Victor Gomes pointed to the spot.

Sadio Mane stepped up to give his nation a glimmer of hope that they could become African champions, but the Pharaohs goalkeeper Mohamed Abougabal did what he does best and saved the penalty.

The rest of the encounter was dominated by Senegal, but they could not find the back of the net despite all their efforts.

Senegal and the rest of the world knew that the longer the game went on, the more likely Egypt would be to steal a victory.

One thing Senegal would have wanted to avoid was to allow the game to go to penalties. Until tonight, Egypt had never lost a penalty shootout in the tournament’s history and held one of the best shootout records in the world.

However, after two hours of football and several chances later, the game was heading to the dreaded shootout. Abougabal, who saved a total of four penalties at this tournament, looked impenetrable.

It all but seemed that the Northern Africans would lift the trophy for the eighth time.

But fitting to this year’s Afcon tournament, records were meant to be broken and history was destined to be made!

Egypt uncharacteristically missed two penalties during the shootout – which left it up to none other than the man who missed a penalty in the opening stages of the game to seal his nation’s history.

Mane stepped up confidently, looked to the heavens and made no mistake, slotting the ball into the bottom left corner of the net to hand Senegal their first-ever Afcon trophy.

Senegal and the world alike will revel with their local coach Aliou Cissé who was involved in the 2002 and 2019 final, losing both – once as a player and the other as a coach but the manager finally gets his hands on the illustrious trophy.