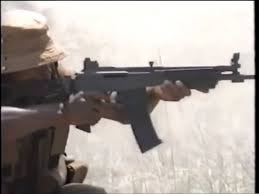 Two soldiers and a civilian have been arrested for stealing a large number of army weapons from a Pretoria base.

The stolen firearms were hidden or sold on the East Rand. Thirteen R4 rifles and a pistol were recovered in Daveyton.

Two soldiers, Sidwel Tyawana (36) and Tumelo Mangale (28), have appeared in military court. The civilian, Kgotso Mooketsi (36), an employee of the Department of Education who was on bail for an unrelated armed robbery case, was arrested in Springs with an R4 rifle.