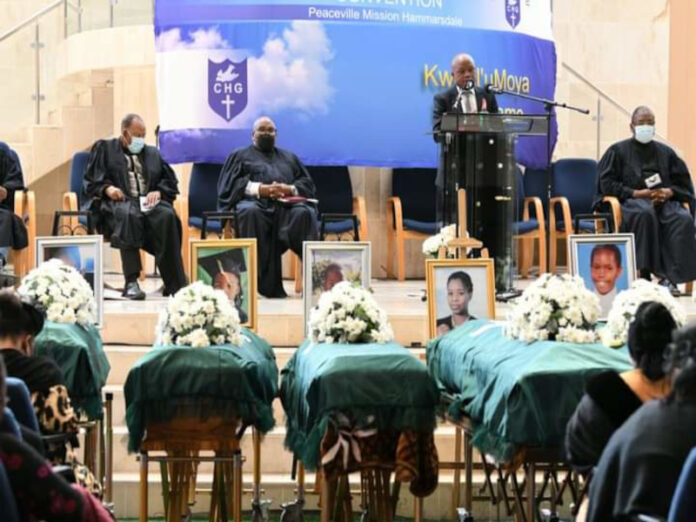 It was a moment of sorrow when five members of the Jikela family were laid to rest on Sunday.

The mass funeral took place in Durban where hundreds of grieving mourners packed inside the Ndwedwe community hall.

Their eyes filled with tears as they watched proceedings, while the coffins of a mother and her four kids were lined up next to the hall stage.

Speaker after speaker spoke about the devastating effect of the floods on families.

“Bonakele’s lineage is gone in one day. This is very sad,” one speaker said.

The only surviving member of the family, Nombulelo Nhlangulela, spoke about her miraculous survival during the funeral.

She is Bonakele’s cousin and she was found unconscious next to the river bank soon after the shack she was sleeping in was washed away by the floods.

“I went to the house where they were sleeping to check if everything was okay with them before I went to sleep. And the rain was already pouring. That was my last time seeing them alive,” she said.

The next time she opened her eyes, she said, she was soaking wet, weak and lying on the river bank where she was spotted by community members who rescued her.

“I still don’t know why my life was spared but I’m grateful,” she added.

She said that she doesn’t know how life will be for her without her family members.

She has been offered temporary shelter by the municipality and hopes to recover from her loss and rebuild her life in memory of her cousins and aunt.